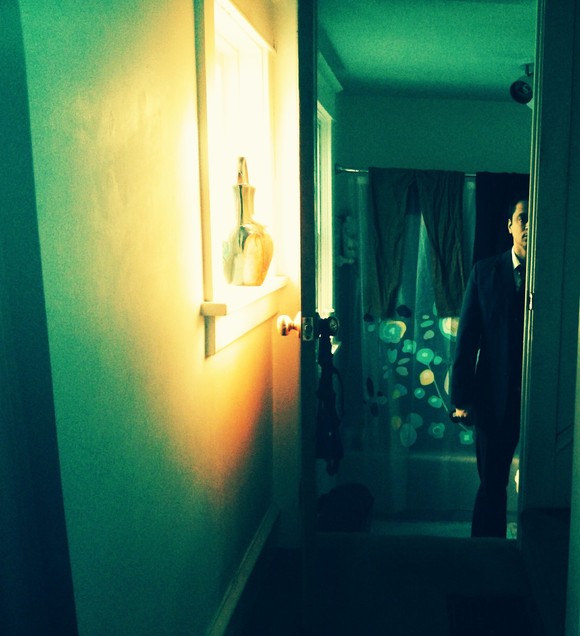 Ryan Holiday is a laptop musician/vocalist from the Philadelphia area, who until recently performed under the moniker Diseases of the South.

Holiday has released over a dozen albums and has written music for stage and commercials. Holiday works with pre recorded loops and mixes them with live vocals, live layering, and live sound manipulation. It is a hybrid of DJ and live musicianship.

Calling Ryan Holiday a survivor of the music business is a bit of an understatement. After 9 albums and a handful of EPs, he is either stubborn or just plain stupid. While Holiday was growing up in Germany, it was Iron Maiden’s (yes, Maiden) live theatrics that drew him to a life in music. After moving to Los Angeles at the tender age of 17 to “make it big,” he trekked across the United States with his best friend and eventually settled in New York City. In the early part of the decade Holiday was signed to an independent label with the band In Between Blue (IBB), a bombastic indie rock band in the vein of Jeff Buckley and U2. IBB established a following by selling out CBGBs in New York and Maxwell’s in Hoboken, NJ. Working under the tutelage of veteran producer and label owner Richard Gotteherer (Blondie, Go-Go’s, Raveonettes) IBB released two albums. However, they were unceremoniously dropped (and gracelessly split up) immediately after their sold out CD release party.

Holiday took a few years away from the music scene and recorded two EPs (The Lost Art of Whining and Happiness?) in his bedroom with some sympathetic (or worried, or indulgent) friends. Eventually, Holiday ventured outside again and put together the band Heterogene with a few friends from the Hoboken scene. With their Kraut- and Art-influenced Rock they again began building momentum by filling clubs in and around New York and Hoboken. In 2006 Heterogene went into a studio with veteran producer/engineer John Seymour (Mighty Mighty Bosstones, Dave Matthews, U2) in hopes of landing a record deal. Although little more than inspiration resulted from that working relationship, Heterogene did release an ambitious double album (AM-PM)on their own in 2006.

Shortly thereafter, Holiday moved to Philadelphia for a change of scenery and some musical soul- searching. The result: a change of style. Holiday fell in love with Weimar-era Kabarett music as much for its social commentary as its sound. Drawing on such influences as Tom Waits, Jacques Brel, Kurt Weill and Bertold Brecht, Holiday began writing songs that skewered the social mores he observed in the world around him. The result was Gender Politics Vol. One, a concept album about mating rituals and weddings amongst the Bridezilla demographic. Holiday released the album online and for free as an experiment to see if people liked the songs. The response was overwhelmingly positive (save for his friends, most of whom were roundly offended and no longer speak to him).

In September 2009 Holiday released The Utterly Useless Life of Mr. Holiday his second full-length concept album. Having spent ten years-plus in a dead-end job with a national bookstore chain, Holiday channeled his experience into …Utterly, which follows a day in the life of a retail worker from the first time he punches the snooze button until he falls into bed, dreading the next morning.

In 2010 Holiday was awarded a grant to write and produce a musical. The result was WHITE: the musical, based on songs from Gender Politics. WHITE was successfully staged for three sold out nights at Camden County College. It is currently being revised for future performance. Later that year Holiday was chosen to sing the lead in Fred Hersch’s Grammy winning jazz operetta, Leaves of Grass. Holiday is also a contributing writer to Glide Magazine (glidemagazine.com) where he blogs about the music business.

In September, 2011 Holiday experienced a revelation in his music career. This one occurred while while he was playing in a band called Actors In Bands. Although he truly enjoyed the company of his band members, Holiday was growing increasingly frustrated with their lack of commitment and artistic production. While it was hard to blame a drummer with a wife and three children for setting certain priorities, or a guitarist battling a bad marriage and his own demons, cancelled rehearsals, unproductive writing sessions, and all out drinking binges became the norm. And when one of the band members fell off the face of the earth for weeks, Holiday had had enough. It was time to change.

Holiday purchased a Macbook Pro and loaded it with Ableton Live, and became the one-man-band called Diseases of the South(DOTS). The idea of DOTS was to put a unique spin on the music-making process. “I don’t see songs as finished products; they are suggestions of what might be. I use recordings as jumping-off points. A basic song idea is expanded by adding textures and melodies, changing the structure, experimenting with new sounds, or adding a layer of visual effects”, Holiday says. And these expansions are done live, so the audience experiences new configurations with every performance. DOTS is a one-man operation that primarily works with loops, vocal layering, and electronic production equipment to build songs. Both music and found sound bring inspiration.

After releasing four EPs throughout 2013, Diseases of the South has released two albums in February 2014. The albums, simply known as Night and Day, are a 24 hour snapshot of modern suburban life. Night/Day discusses the stresses of life choices, insomnia, self doubt, and depression that revolves around a suburban household. The “Night” side, a collection of eight pieces, is presented as a single 35 minute long track. The pieces are small, ambient, and at times a little creepy. Night is most definitely the antithesis of Day. From the grinding wake up call of Good Morning, to the repetitive daily routine in Oddly Meditative, “Day” explores the tension of keeping it all together. There are chord progressions that reappear throughout Night & Day, tying the albums into a concept, not unlike movements in a classical piece. Night leans towards artists like Brian Eno, Raintree Crow, and Talk Talk’s Laughing Stock. Day has a livelier sound more akin to the art-rock of David Bowie, Peter Gabriel and St Vincent, while integrating heady electronic music not unlike Moderat, Underworld, and Atoms For Peace.