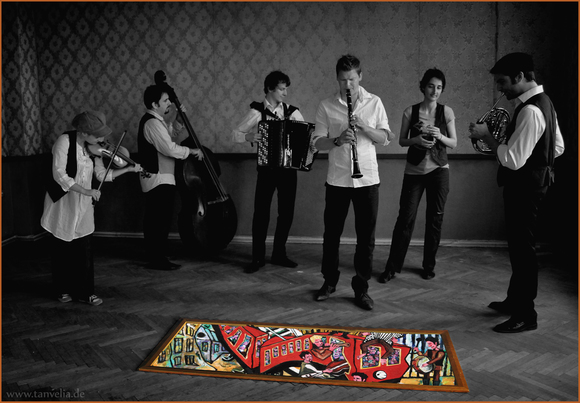 In the beginning there was a dream.

The dream of the almost completely lost, traditional klezmer music with its diversity and distinctive sound - with the instruments sounding like a human voice and make your soul laugh and cry at the same time.
Some years ago in Berlin this dream brought together Marina and Ofer ...

"Music to love, laugh, cry and dance" is the motto of the band Di Meschugeles. Thus, their music sounds fiery, inspires to dance and is heartbreakingly moanful at the same time, not only through the harmony typical for Klezmer, but also through their special play and acoustic color.

They perform regularly at the "Pankower Klezmer Days."

In June of 2011 "Di Meschugeles“ followed an invitation by the Goethe-Institute to take part in a concert tour through Canada where they performed for example at the “International Yiddish Theatre Festival."

Their music can also be heard in Isrealian and Spanish radio.

With the support of "Deutschlandradio Kultur" the band produced their first CD.