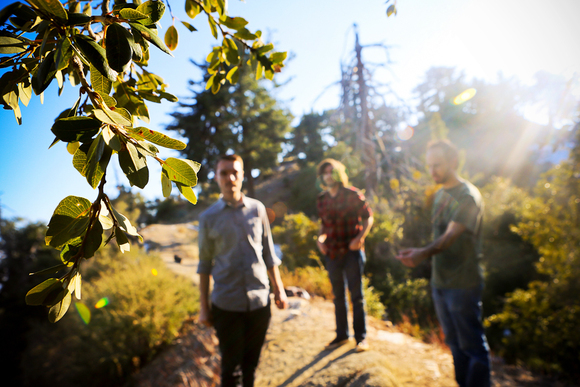 Derde Verde is an artful and seductive indie-rock trio from Los Angeles, CA.

Their songs weave shape-shifting rhythms and melodic guitar lines with eruptive dynamics and intimate, heartfelt vocals. With a range of influences from shoegaze, to krautrock, to indie electronica, the band’s music has been described as “instantly engrossing, buoyed by excellent arrangements and impressive vocal harmonies… Derde Verde may be the closest thing Los Angeles has to its own Radiohead right now” — Tom Child (LA Record).

Derde Verde will be returning to Europe for the first time since the release of their latest EP, Let Me Be A Light. The group will be touring for a string of shows through Germany in December 2014. The band tours regularly throughout the U.S. and has played festival dates in Europe. Their compelling and spontaneous live shows have earned them critical acclaim, and they have shared the stage with iconic krautrock pioneers Faust, P-Funk/Talking Heads keyboardist Bernie Worrell and punk legend Mike Watt of the Minutemen.

Their latest EP, Let Me Be A Light, is out now on 12” Vinyl, CD, and download, and is now available on iTunes, and through the band’s bandcamp.