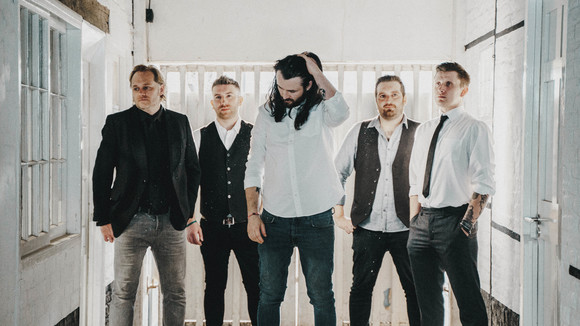 Highly regarded alt-rock quintet Dead Reynolds ​are here to stake a prominent claim with their mesmerising new single, Bring It Down, out Friday 25th June.

This anthemic cut is lifted from the contemporary rockers’
greatly anticipated debut album, Breathe With Strangers, which lands on Friday 17th September, via Fort
Records.

Born at the very end of 2018, DEAD REYNOLDS have continually progressed and evolved, with the energetic
fivesome constantly gaining the backing and approval of a slew of tastemakers. So far, the band have received
glowing praise from Powerplay Magazine, Louder/Classic Rock Magazine, Maximum Volume Music, Moshville,
Devils Gate Music, and Punktastic. As well as obtaining broad acclaim for their recorded work, DEAD REYNOLDS
have also notched up airtime with Kerrang! TV and Scuzz TV. The band have also been repetitively supported
by Kerrang Radio’s Johnny Doom, with Johnny persistently pushing the band’s singles and releases. In addition
to DEAD REYNOLDS being regularly playlisted by Kerrang Radio, the UK tunesters have also obtained worldwide
radio airplay across fifteen countries, and have been played by hundreds of radio stations. Sharing stages with
everyone from Deaf Havana, Mallory Knox, and Mark Morriss (The Bluetones), as well as their own headline shows, has also vastly increased their profile.

DEAD REYNOLDS’s time is now. The band will release their album, Breathe With
Strangers, this September.