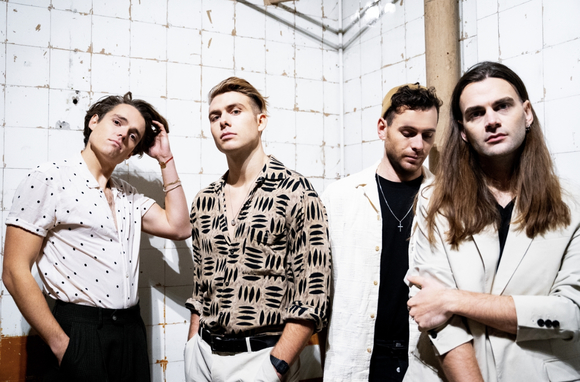 DAYTIME TV stride into 2022 having gone down a storm opening-up for Two Door Cinema Club’s huge shows at the end of last year.

Not to mention proving a smash
with the crowd at Glasgow’s TRNSMT festival recently as well as playing at
Murrayfield Stadium in front of 60,000 rugby fans just before the Scotland v
Australia international kicked off. The band have just been named in Spotify’s Top
100 Fresh Finds UK for 2022.

November ‘21 saw the band complete their debut UK Headline Tour, bringing their
formidable live show to 14 cities around the country in venues ranging from 250 -
1000 capacity. They even found an unlikely fan in A-list actress Margot Robbie
who attended one of the band’s shows in London.

The band’s debut album is due out on February 26th. Recording with GRAMMY®-
nominated producer Romesh Dodangoda (Bring Me The Horizon, Twin Atlantic,
Lower Than Atlantis) gave DAYTIME TV the opportunity to push the boundaries like
they always wanted and their fans are impatiently waiting for the drop.