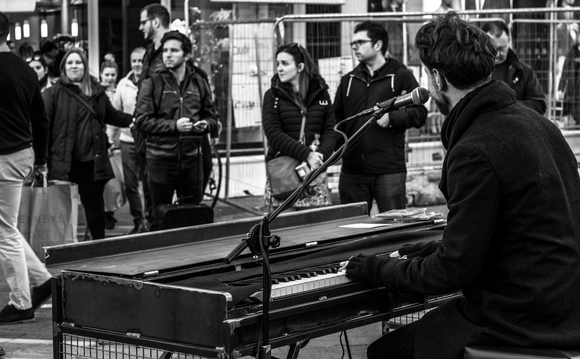 Irish singer/songwriter currently based in Berlin.

David Owens has spent the past four years becoming one of the most successful street musicians in Europe. Originally from Galway, Ireland, he worked as engineer before leaving it all to follow his dream at 23 years of age. Since then he has made a name for himself, playing on the streets on the 31 cities, and more recently at shows and music festivals in Germany, Switzerland, Ireland and Scotland.
After spending 2016 touring with his electro/indie duo "Until April", 2017 sees David switching to the piano, his main instrument. To bring his piano based works to the street he has constructed a 100kg steel piano complete with wheels and a giant umbrella. His new EP "Pretty" showcases his new direction. Touring from April - July, David is available for shows across Germany and neighbouring companies.