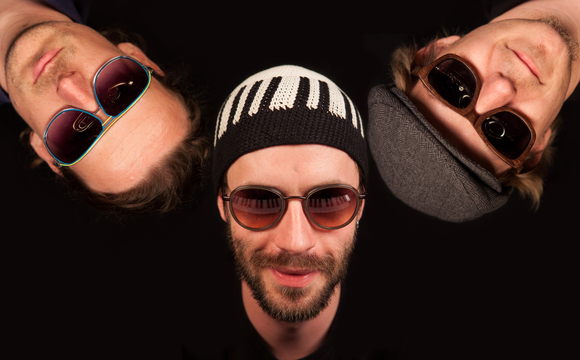 Two rewards and the audience prize at the world biggest jazz-piano-solo competition of the jazzfestival montreux, a lot of enthusiastic/international reviews for his CDs and the most important prize in Austria 2011 - the "Outstanding Artist Award" - David Helbock, the pianoplayer coming from a small little village in Austria called Koblach, is with no doubt, on his way up to a great international musical career. Helbock is not only a great pianist, he is also a very individual thinker, who is investing not only a lot of dexterity but also quite an amount of brain activity to his projects.

His project "Random/Control" is a trio but with over 30 Instruments on Stage. With Tuba, Sousaphon, Alphorn, Trumpets, Saxophones, Clarinets, Piano, Toypiano, Percussion, Electronics and much more - every concert turns into a wild and funny rollercoster ride between the muscial elements Random and Control.
On their new CD "Think of One" (Traumton) David Helbock, Johannes Bär and Andreas Broger celebrate the music of Thelonious Monk and Hermeto Pascoal in their own style.
Hermeto himself liked the music so much that he especially composed and recorded one tune for this CD.

"...I think this musician with his „pianocap“ is one of the most exciting players of the young european jazz scene. The listener experiences something new when David Helbock plays. And it ́s never „top-heavy“ music – it ́s music that thrills the body and the mind..."
(Roland Spiegel - Bavarian Radio)

"...This is carefully-crafted, playful music from all over the world, rendered with a Central Europe flavor. Craggy rhythms and melodies with no foreseeable direction make this offering endlessly enjoyable..."
C.Michael Bailey - All About Jazz

"...This is one of those ultra nutty mash ups that makes modern tastes grin gleefully ands moldy figs reach for their guns. Take three cats, 30 instruments, the music of Hermeto Pascoal and Thelonious Monk and give the cats creative freedom to do with it what they will. So, it sounds like they take some basic Nawlins, give it some meth and fly stuff in and out on the fly. It’s crazy. It’s a fun house ride. It’s a total gasser. It’s taking the A train out of Harlem and into a Disney ride. Certainly there’s jazz in it’s DNA but it’s really world music from out of this world. When the keys to full creative freedom are handed to the right people, boy are the results fantastic. Check it out and leave your attitude at the door---unless it’s a good one..."
Chris Spector, Midwest Record