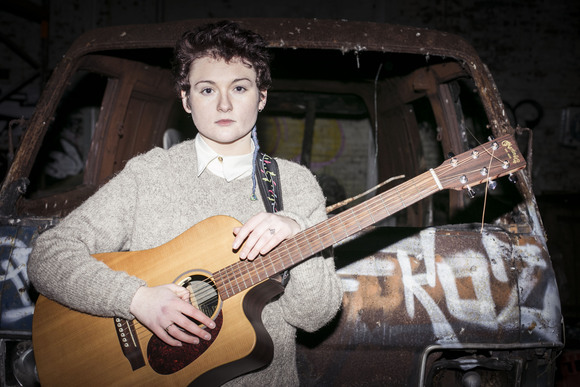 DANI is a singer songwriter and guitarist who enjoys playing a host of different instruments.

Inspired by the sounds of blues, trad and the showbands she was raised with, her vocals fabricate a blend of bluesy coarseness with lullabies that tell you more than what meets the eye. This coupled with her unmistakable folk style of guitar playing and mismatched riffs that ring out with sincerity; creates an atmosphere of unpredictability. Yet each line, lyric and phrase exposes a rawness that leaves an indelible mark upon the listener.

DANI has been playing music from a young age beginning with the fiddle, whistle and mandolin. She turned her hand to guitar aged 16 but it was only the autumn of 2012 that DANI began to devote herself to music; "I could say writing, singing, playing guitar, mandolin and a mixture of fun instruments is new to me but it isn’t. What is new to me is writing honestly, singing truthfully and playing with every fibre of integrity.”

So far, 2013 has been jam packed with appearances in The Ulster Hall Belfast, Titanic Belfast, The Black Box, The Oh Yeah Centre, The Empire (Belfast) and most recently opening Belfast Music Week on the SS Nomadic supporting the likes of The Emerald Armada, The Farriers, In Their Thousands and Silhouette. DANI has also been embraced by Dublin's music scene playing The Players Theatre TCD Dublin and an appearance on Dublin CityFM. As well as playing the Maiden City Festival in Derry/Londonderry and the Ards International Guitar Festival she has also been playing to her home crowd in Armagh at the Armagh Blues Fest and along with The Crowbar Blues, The Do Rightly’s and Monto.
With the release of her debut EP, ‘It speaks for itself’, to a sold out crowd in The Black Box Belfast, there seems to be no limits to her success.

'So many artists come through the Internet to our site, but I have to say only a few have that spark. DANI has it and when she starts the fire there is no putting it out.' Festival and gig gig Ireland

‘a future folk champion of the world’ Folk & Tumble

‘DANI is a singer songwriter who is fast scaling the heights of the scene across Ireland but with accomplished musicianship, mesmerising solos, heartbreaking vocals and massive riffs that would give Mumford & Sons cramp there is much more to this young talent than meets the eye.’
Folk & Tumble