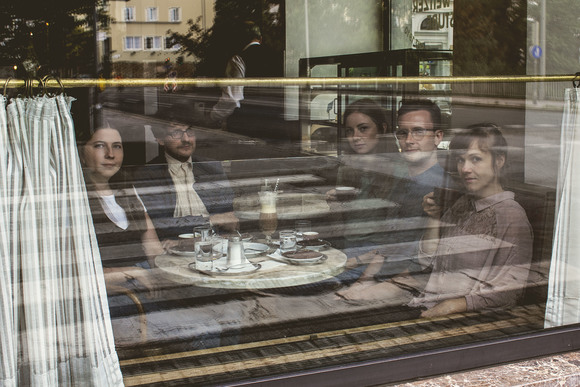 Since Crush was founded almost five years ago, the quintet has become the worst-kept-secret in the Shoegaze, Indie rock and Dream pop sphere. Crush's music is a steadily growing mixture of extremely charming pop-gems. It’s as if Beach House got together with former The Long Blondes-leader Kate Jacksons to deliver on the promise that The Pains of Being Pure at Heart couldn’t keep.

Mini--Album Sundown out in March 2020!
Sundown, the new EP by Crush, a band from the midsize Austrian city of Graz trading in a melancholy yet uplifting brand of pop, offers no less than four brand new chances for just such a rare dawn time epiphany to happen.

First clip/track There you go is out now!
Not unlike that trick that Blondie used to pull off so masterfully back in the day, Crush then contrast the opener's urban synthscapes with the punchy garage beat of There You Go, casually laid down by bassist Verena Borecky and drummer Florian Kolar (who has since been replaced by Jakob Puttinger), stylishly adorned with keyboardist Katrin Borecky's Farfisa fills and a tight 12-string solo by guitarist Christian Lach.

Already two compact short formats were enough to position Crush - Christina Lessiak, Christian Lach, Katrin Borecky, Florian Kolar and Verena Borecky. Damaged Goods (2016) and No Easy Way (2017) did, after all, drop half a dozen catchy tunes that can't be killed.