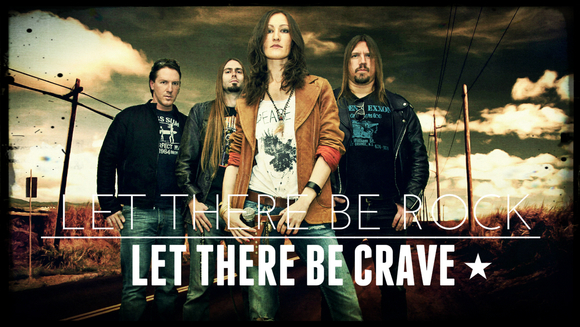 LET THERE BE ROCK ★ LET THERE BE CRAVE Sometimes you have to break a thing apart and go back to the grassroots - back to the simplicity of a set of drums, a guitar, a bass and a vocalist.

Inspiration is as free as the open road, but it is on that open road that an artist finds their journey through reinvention, their reinvention through soul.

In January 2012, in the graffiti sketched basement of Berlin’s historic Georg von Rauch Haus through a jam session with guitarist Nils Rocke, vocalist Lucia Burana, bassist Andreas Siegl and drummer Marc Reign emerged a joining of rock forces and like musical minds that was meant to be. As each rehearsal took shape a new brand of rock was born. The inception of CRAVE, the inception of CRAVE-ROCK.

Eight months later, CRAVE gave their first official concert performance in Berlin delivering a dynamic thrill ride of talent with 10 original sounds in a tour de force of gripping guitar riffs, precision drum beats, pumping bass lines, and evocative power-house vocals. Their musical influences showcase the evolution of modern rock while playing homage to classic rock greats with their own magic in between.

In March 2013, CRAVE got a chance opportunity of working with French producer Mitch Olivier http://www.mitch-olivier.com , whose impressive list of clients include IGGY POP, LENNY KRAVITZ and SERGE GAINSBOURG. He saw the potential of the dynamic foursome and offered to record the band’s debut EP. During an intense 5-day studio stretch, Olivier dissected the beating heart that is CRAVE, elevating their creativity with driving force and passion. With the concept of Olivier and TWIN STUDIOS PARIS, the finalization of CRAVE’s first mixed and mastered EP is now fully realized.

To the lover of rock n’ roll | CRAVE promises to do one thing | to leave you hungry for more CRAVE.

INTERESTING FACTS :
CRAVE’s musical minds are no strangers to the music industry having worked and shared the stage with bands like VOLBEAT, MONSTER MAGNET and BEATSTEAKS.  As well as lead vocalist, Lucia Burana, having worked with renown artists BONNIE TYLER, JENNIFER LOPEZ, PAUL YOUNG and ROBIN GIBB in concerts and on television as their professional background singer.