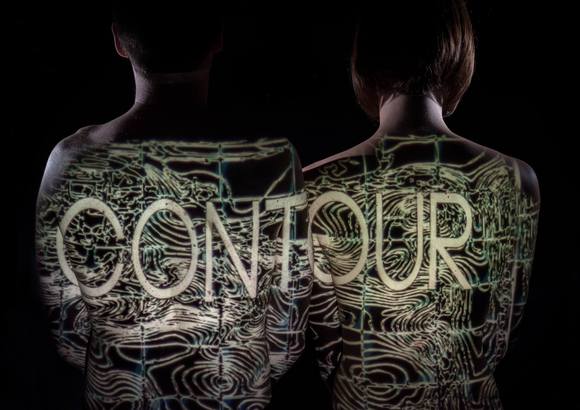 Their musical appeal is owed to the fusion of Conan’s love of bass-focused sound design, complemented by Anna’s layered vocals and stylishly-phrased lyrical content; a merging of the nasty and the melodic.
Things began for Contour in 2013 when the first track that they made gained some attention immediately by blogger Nialler9 who; "ended up on the Soundcloud page of ‘Change Your Ways’ and was a bit blown away by the song’s lush vocalised electronica." The duo went on to release their debut EP, Chaos Theories, in July on Belfast label Champion Sound Recordings. It was described as having "accents and grooves that are undeniably appealing to any ear" by InDublin Magazine, who went on to describe the EP; "Their approach means the imagery that they fashion can bring their listeners anywhere; maybe you’ll feel as if you’re paddling in a deserted lagoon, or surrounded by looming industry, or watching from the window of a countryside coach. The beauty of Contour’s sound is that it is open to interpretation by all that hear it."
They performed at festivals across Ireland such as Life, Electric Picnic and Hard Working Class Heroes where Hot Press noted that they "gave one of the performances of the weekend, with heavy bass and house-style vocals combined in a glorious hybrid." InDublin noted their performance also, stating that; "...their sound is alluring in all the right ways. It’s aggressive and chaotic and entirely addictive live. Considering the duo have only been together since last year, they’ve got a great chemistry. While it’s the melody and synths that take centre stage, the vocals come to the fore when heard live; a lush, transfixing aural experience." They featured on BBC NI's 'The Arts Show' performing in the Full Dome for Derry CultureTech and performed in studio sessions for 'Across the Line' on BBC radio as well as TXFM and Press Record.tv.
The band have spent the year refining their sound and continue to push the boundaries of electronic music, making innovative tracks that are sure to make you dance or assist you drifting off into a trance. They also continue to develop their exciting aesthetic with the help of Chris Lynch who collaborates with the duo for videos and for their A/V shows. Contour are set to release their second EP "Blessed with Weird Things" in April 2015 and they have some exciting gigs planned in Ireland and across Europe.