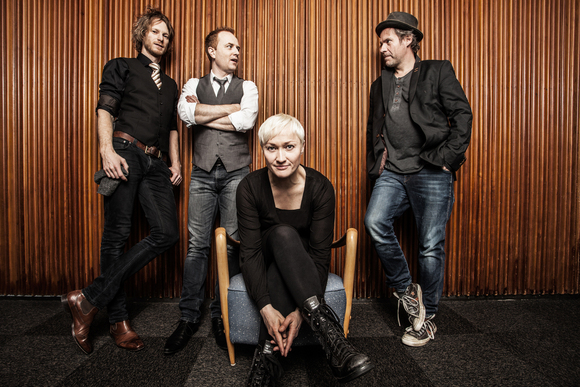 "Come Shine" Like many other jazz bands, "Come Shine» started out playing American standards in their student years.

Unlike most of their fellow students from that time, they still do. However, they play standards in their own way. That´s why Chick Corea stated about the groups pianist: «Erlend Skomsvoll is one of the best arrangers in the world». Come Shines unique ability to add a new creative twists to anything from Broadway songs to Johnny Cash-hits has made this jazz quartet into a blockbuster, selling out venues from Oslos famous Opera House to countryside clubs. When the band got together again following a recess from 2004 to 2010, Norway's prime jazz journalist Terje Mosnes of Dagbladet hailed Come Shine to be a "national treasure" and demanded that they made a new beginning for the quartet and stayed together. Pianist Erlend Skomsvoll, drummer Håkon Mjaset Johansen, bassist Sondre Meisfjord and singer Live Maria Roggen represent a generation of talented and well educated Norwegian musicians that become internationally renown performers at young age. Today, they are some of the most in demand jazz performers of Norway, working world wide in various settings.

However, their main musical asset, the quartet «Come Shine», have been a well kept Norwegian secret. Until now. The release of the new album «Red and Gold» (2014) also marks a new international approach for the group Come Shine. The reason is simple. Some friends in the international music business just asked the question: Why don´t you share this fantastic music with the rest of the world? And with raving reviews in Norwegian press on the brand new album "Red and Gold" - this is the time to do it.