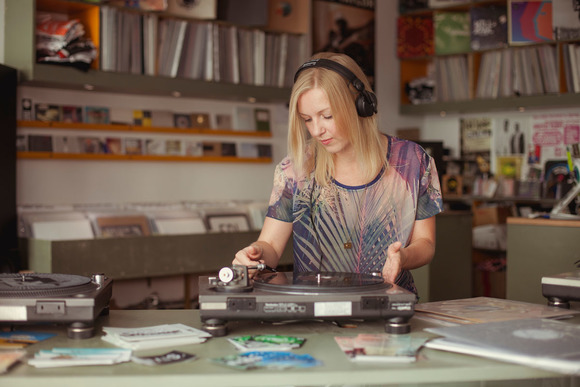 "I play the best electronic music for the right moment and I love to inspire people with my music and creating energetic moments."

Amazing that two vinyl players can change your life. Nicole Zwahr aka Coline started to play as a DJ in 2001. Her feeling for contemporary electronic sound is deep. Coline's journey into electronic world began in the middle of the 90s. Since that time school of Frankfurt and Berlin plays a prominent role on her way. The result of over 16 years DJ experiences is an amazing special Coline sound she creates during her passionated vinyl sets - a mixture of techno, deep dub sounds and deep housy music- spaced out, hypnotic, psychedelic, funky and experimental. Beloved are Coline’s afterhour sets and rare her lounge & chill sessions. Allround vinyl girl!

Coline has played at many clubs and festivals around Europe. She became well known for her warm up and support sets for Sven Väth, Adam Beyer, Pascal Feos, Tobi Neumann, Chris Liebing, Electric Indigo, Andre Galuzzi, D.Diggler, Daniel Stefanik, Dinky, Kosheen and many more. Coline also conquered the hearts of international scene freaks. Gigs in London, Brussels, Perugia and Turin, Marseille, Vienna, Ibiza and Leeuvarden in Netherlands are on her reference list.

Also in 2007 Coline started to produce and compose electronic music - the beginning of a lifetime trip into a world full of endless possibilitys. Her first tracks have been released on HarryKleinNetworks, MIRmusic, Bogotraxx, Robot Ranch, temp~records and on the german DJmag Compilation in June 2011. Since 2010 Coline is a member of "Produzentenschmiede" in Frankfurt/Main. Cause of so many projects, time prevents a bit to go on in the studio. But soon you will get new stuff.

Since one year she is part and resident DJ at the underground Club TBA in Dresden, working as a nightmanager and booker.