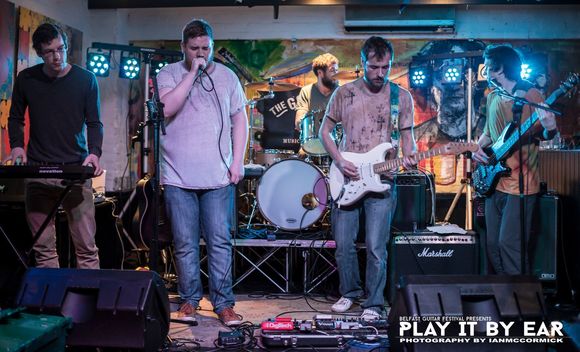 Civil Simian were in equal measure shocked and pleased when they won last year's Guinness Versus tournament, a BOTB competition bringing together twenty of the best Northern Irish acts of the last years, but the multi-instrumentalists' buzz and sphere of influence has been steadily expanding since their formation in Summer 2014.

The music begain in 2010 when lead singer Ruari McCloskey met lead guitarist Martin Price in a Katy Daly's and they started talking about music. "It was immediately clear to me that I wanted to be with this man," quips Ruari, "in a purely musical sense, of course. All the signs were there, he even liked Smithwick's!" They played with other members as Urban Scarecrow until Summer 2014 when they undertook a change in style with the addition of an imaginitive synth player in Ben Fleming and decided a new image was necessary. Homeward migration then deprived them of a rhythm section and another excellent Belfast band The Sins of Flynn of everything but the rhythm section in early 2015. The mutual musical respect between the remaining members made a new group the obvious move. "I was so happy when Sean [McCann, the bassist] joined us, he's easily the best bassist I've ever played with and probably the best I've seen in NI." says Ruari. After Sean joined the very talented drummer Colm O'Flynn was swift on his heels to complete the ensemble and his live drum reimaginings of some of their sample-based tracks has really helped to define and polish their modern sound.

The band have so many influences it's impossible to pin them down to a single genre. One of McCloskey and Price's biggest influences is Radiohead, and, like them, they're constantly reinventing themselves between songs. "For us it's really about finding the style that suits the song after it's been written, often we try and play new things over and over again with a trip-hop vibe, a reggae vibe, or whatever comes to mind, until we find something that's exciting." They've been alternately described as "psychedelic future-funk" [BBC Radio Ulster], "James Bond soundtrack" [BBC ATL] and "a truly unique blend of soul, funk, rock, pop and about 20 other genres" [SO:NI] to name just a few things.

“One of the best new bands in the country ...unique and original alt-rock...funk...electronica – excellent lead vocals...soaring, soulful.”
-Philip McCarroll (Pay*ola)

"if they continue to come up with material as strong as ‘Believe’ then, frankly, they can call themselves whatever they like"
- Al, Chordblossom (apparently ape-based band names are becoming common in NI)

“a truly unique blend of soul, funk, rock, pop and about 20 other genres, with fabulous vocals and memorable songs.”
-SONI promotions

Right now the band are still gigging steadily around Belfast, and branching out to other parts of NI. They are hoping to bring out an all-Ireland tour very soon closely followed by a UK tour to celebrate the release of their forthcoming full-length album.

"The most important thing for us is making new music that we love to play and love to listen to ourselves," says Ruari, "I listen to our album all the time and think about all the work that went into it, and I love it, and it's not even finished yet! But we're very close. Coming soon folks, coming soon..."