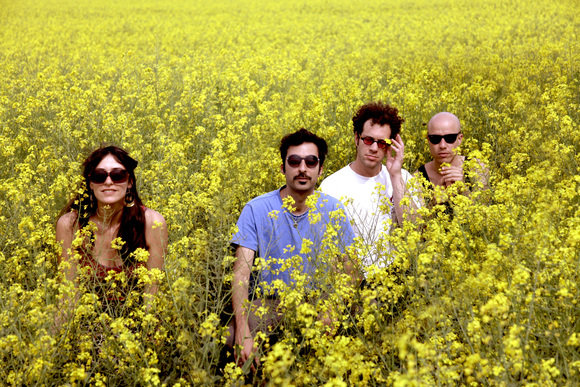 The band, previously named Jachzen Bachzen, was founded in 2011 by bouzouki master Liad Vanounou and bass player Roy Gdalya, two key members of the legendary Mr. Mostash, who were the first to introduce oriental madness and belly dancing flair to the Berliner retro party scene.

The band started off as an instrumental group, speeding up popular Greek folk songs of the 50s by famous interpreters and composers such as Stelios Kazantzidis, Manolis Chiotis and Vasilis Tsitsanis. After a period of busking in Berlin’s markets and squares, the band gained public affection starting to establish their unique place in the local outer-national ballrooms and festivals, alongside the dominating electro-swing and Balkan orchestras.

After some loose collaborations with guests singers and musicians, the group was joined by lead vocalist Lorena 'Cherry' Atrakzy, who elevated both their sound and stage presence.
She discovered a world of common and shared music, as many of those popular tunes were sailing off from the port of Thessaloniki, passing the Bosporus and via Anatolia, and then carried further by the waves of the Mediterranean sea, to be washed ashore the taverns of Jaffa. Moved by her love for singing in foreign languages, she extended the band's collection of oriental golden classics, forming a diversified and colorful vocal performance in Greek and Turkish.

Live, the band produce an explosive show, seducing the audience and taking them on a mysterious and culture clashing cruise between past and present, east and west. Throughout the journey there are elements of the re-emerging musical heritage of Greek 'Laïko' of the 50s, 'Anadolu Rock' of the mid 60s and Israeli 'Mizrahit' of the 70s.