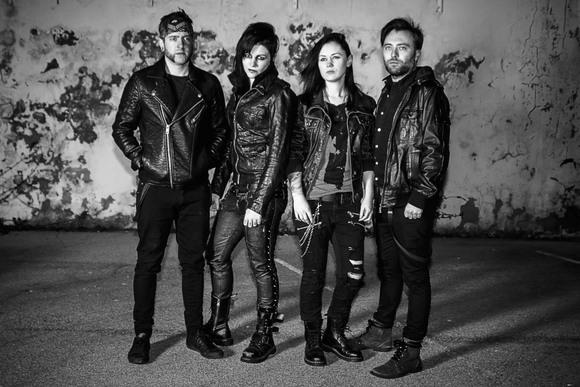 Careering into view like a raging typhoon, Leeds based Chasing Dragons are a sprawling beast that incorporate frenetic post-hardcore bursts of penetrating guitars, thunderous vocals and a titan-esque rhythm section; all which entwine with moments of alt-metal, hard rock with a defining punk undercurrent.

Chasing Dragons released their album teaser "Faction:Prologue" on March 29th 2016 independently and funded through Kickstarter. The record consists of three tracks from their upcoming debut album "Faction" [scheduled 2017] and provides vocal hooks that will grab you by the heartstrings, screaming guitar solos and riffs to make your fist pump, melodious vocal harmonies that hit your happy place and a rhythm section so tight you could set your watch to it.
You can order "Faction:Prologue" here.

“Clawing out of the speakers with thunderous track ‘Broken Jaws’, this female fronted Leeds group have a fairly impressive touring past... Singer [Tank] is no prissy girl either and gives it her all, ranging from the soft dulcet tones to wailing rock goddess alongside driving riffs and cacophonous drums in ‘Throw Down Your King’... For those that love a little blues-touched hard rock with some female attitude, this will please you indeed.”
Big Cheese Magazine

Unafraid to step outside their realms of metal riffery, their EP "Checkmate" [2014, Lee Batiuk (Deaf Havana)] launches you headlong into the full throttle rock and whips you on a journey fused with thick molten riffs dripping with an underlining harmony which then slips into moments of soft melancholia, frantic bass lines and unrelenting guitar pushing it to the limit. They tease you with a sense of mischief, surrounded by a cacophony of rage, defiance and riffs so meaty they could move mountains. Reaching deep inside, they grab your heart and soul and rouse you to stand up and be counted; do not be bound, do not be tied town – fight and fight to survive.

The band released their debut EP “Take Flight For A Firefight” [2012] with production from Graeme Atkinson (Fightstar, Take The Seven) and Carl Bown (While She Sleeps, Trivium). Their single "Hindsight’s A Bitch" [2013] is also available to view on Youtube alongside acoustic track, "It’s Bravery, Honestly".

“...it's rare that you come across a band with so much commercial potential as Chasing Dragons; I really can see them hitting the dizzying heights of Kerrang! magazine front covers and top 20 album sales.."
Leeds Music Scene

Chasing Dragons are unrelenting, rocket fuelled rock and metal that you can see Lemmy tipping his Stetson to in approval in the distance somewhere.

Drawing comparisons to Iron Maiden, Avenged Sevenfold, Hammerfall and Halestorm, Chasing Dragons are coming out of the traps making some noise and having already shared line ups with the likes of Skindred, The Blackout, Funeral For A Friend, Glamour Of The Kill, Pendulum, Silent Screams, Betraying The Martyrs, InMe, Death Angel, The Sweet and Fearless Vampire Killers amongst many others and they intend to grab you by the throat.

“I wanted to use an expletive myself here but I won't, Holy Smoke, this band is good... there may be elements of their music that you have heard before but they are seamlessly sewn together in an individual style... I cannot imagine how hard the band had to work to produce an EP of this quality, the musicianship is spot on, the vocals are mind blowing and the production is without flaw.
This is the easiest score I've given to an EP yet, no messing... 10/10”
Black Phoenix Rising