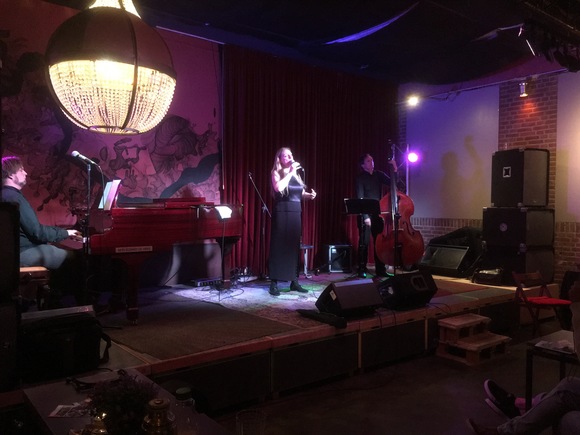 Three released albums: a live album and two studio albums. They all got lots of excellent press reviews in the Dutch and international media (to watch some reviews, visit the reviews page on our website ). The first track on the 'Straight Stories' album is recorded with featuring artist Fay Lovsky on theremin and singing saw. Chabliz took up influences from dreampop, rock, opera and gothic jazz. In June (the 2nd) 2021 they will release their next single, 'Beyond the Tides.' The next complete album will be released in 2022. During corona the band gave several livestream concerts. In March 2016 the band played four liveshows in New York City, USA. In June 2014 they won the Public Award of the Delft Fringe Festival (category 'music').
Piano / keyboards, double bass, vocals (a core of 3 bandmembers) and sometimes drums and /or guitar (on the band picture you see the extended band with the drummer and guitarplayer). They’ve been compared to 'New Romantic' -and other- bands (Bat For Lashes, My Brightest Diamond, Beach House, Kate Bush, Nina Hagen, London Grammar, Ute Lemper, Nico and Nick Cave). Two bandmembers are also influenced by Joy Division. In 2013. Chabliz released several videoclips on You Tube and gave many concerts in Holland and abroad. They flew five times to Bucharest, Romania for several concerts on festivals in the past years.

Who:
Singer-songwriter Petra de Winter signed a record deal with major Roadrunner-Arcade (CNR). She performed at stages all over the world including London, Copenhagen and Tunisia. In Holland she was a guest of Paul de Leeuw at his popular national TV show. Petra has also worked with other Dutch musicians and producers, such as Holger Schwedt, Leendert Haaksma, Michiel Papenhove ( ex- Within Temptation) ,Arie Spaans (Suburbs, Naked), Cor Gout (Tresspassers W), Daniel Derks (ex-de Dijk), Hans Eijkenaar, Michel van Schie, Shell Schellekens, Mick Paauwe, Bobby Jacobs and Tjeerd van Zanen. She was the leadsinger of musical theatre group “Danse Macabre”. Petra studied at the DJAM and the Royal Conservatory. She also does studio work (vocals) for producers in several studios, and she is singer-songwriter and coproducer in the Copenhagen- based band “Olsen Winter”. She sometimes sings vocal lines for the Croatian group “Far Go Traders” too and she produces her own songs.

Pianist-keyboardist Pim van Riezen had some small hits with several house songs on the Rave Records label. He studied music technology at the faculty of Art, Media and Technology of the Utrecht School of the Arts. Pim plays pop, classic organ and jazz piano. His extra speciality is recording, mixing and producing. He loves old fashioned synthesizers. Pim has taken up a leading role in getting our new self-produced album off the ground.

The guest musicians underneath play on the new studio album and sometimes, with bigger concerts, also live with Chabliz on stage :

Drummer Ap de Ree entered the finals of the important “Big Prize of Holland” with his band “The Butler”. He also played in new wave band Basic Scream, and formed a duo with his ex-wife, a gifted singer and pianist. They toured together for several years. Nowadays he also plays rockcovers with his coverband “Liverpool” and latin-american drums with his salsaband “Del Norte.”
Guitarplayer Rene Meester joined the band since summer 2012. He played in many bands, including The Faint Lights. He did the SAE and recorded and mixed his own songs with the Faint Lights. He left the band in 2013, but sometimes he’s still on stage or in the studio with Chabliz.
Guest players of Chabliz are guitar player and songwriter Henrik Olsen, who lives in Copenhagen, and guitar player and studio technician / producer Marcel van Ling. Marcel owns his own Mosound studio and also did some studio work for the band. Cello player Giselle Bentvelsen
played cello at one of the new songs. She also accompagnied Barbra Streisand at her concert in Holland (Ziggo Dome, 2013).
Chabliz’ studio album “Nightporter” has been produced by Wim Oudijk in his Discofair Studio. He had several top 40 hits in the seventies with his band ‘Navel’. Last years he worked with bands as a producer; Wim produced a.o. “Venus Flytrap”, “Attila the Stockbroaker” and the hitalbum of the famous dutch artist “Doctorandus P“. He co-founded the “Tresspassers W”. Wim guest-produced one track of the Straight Stories album.

Where
Chabliz did five short tours of Romania (Bucharest) at the Jeunesses Musicales Festival and played there in 2009 at the EUROPAFEST festival and at the Hardrock Cafe. Their concerts were broadcasted on the Romanian State Television. The band played extensively all over Holland, in all sorts of clubs, festivals and venues from 2002-2020. Some highlights are the several clubcircuit-stages and festivals all over Holland, The Hague Jazz Festival (where they played gothicjazz), the dutch “Popronde”, Festival de “Falckhof Affaire” and several live radio concerts, also for Radio 2. In March 2016 the band travelled to New York City, USA, where they played four live gigs, one of them at the Real Radio Show.

What
The Live recorded debut-album “Black Blue” was highly acclaimed by the Dutch music-press (a.o. OOR, Fret, Music Maker). Chabliz’ studio album “Nightporter” has been produced by Wim Oudijk. This album got very good (even better) press-critics in the Dutch and international music-press. The album was distributed by the Coast to Coast label. Amongst Chabliz’ fans and appreciators are several celebreties: the late Theo van Gogh, Van Dyke Parks and Adriaan Bontebal. The same excellent reviews they received with their third 'Straight Stories' album.
Chabliz made it to many finals, several jury members chose Chabliz because they love this special kind of music.
The new album is recorded in the band’s own rehearsal room and home studio, and entirely self-produced (DIY).