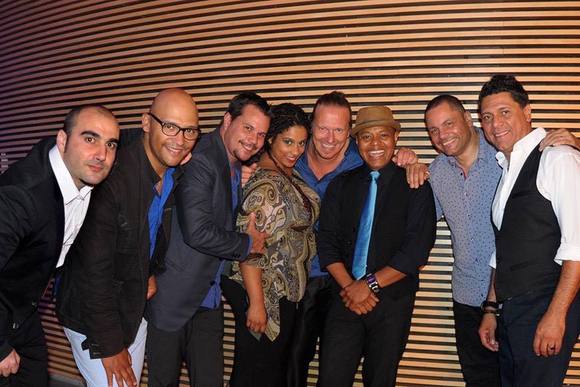 CABOCUBAJAZZ - available as quintet & octet Musicians from 7 countries // all reside in The Netherlands "Seductive, inspirational, passionate!" - Latin Beat Magazine, USA The melancholy of the Capeverdean Islands with a generous portion of Cuban rumba, salsa and adventurous jazz.

A highlight of the 2014 tour was a succesful concert at Jazz Festival Viersen ("For sure the best band on this day!" - mundoclasico.com). In December 2014, the band will perform at the prestigious Havana Jazz Festival, Cuba - hosted by Chucho Valdés.

CaboCubaJazz is the brainchild of one of Europe's top percussionists, Nils Fischer, and Cape Verdean master pianist Carlos Matos and. In an inimitable way, the ensemble blends the joyful dances and the melancholy of the Cape Verdean Islands with a generous portion of sweeping Cuban rumba, salsa and adventurous jazz. The result: 100% CaboCubaJazz. Both the listener and the dancer are taken on a journey where desire, passion, subtlety and musical fire alternate. Their debut album "Rikeza y Valor" has received worldwide plaudits and since it's launch, CaboCubaJazz has toured basically everywhere in The Netherlands and also fascinated audiences in Canada, Germany, Finland, Austria, Thailand, Luxembourg and Norway.
CD Rikeza y Valor is elected best worldmusic CD by Dutch journalists and was nominated four times at the Cabo Verde Music Awards 2012
Available as quintet or octet.

The homebase of CaboCubaJazz is Rotterdam, but it is in fact [through Nils Fischer] also a German project, and keeping in mind the band members from Cape Verde, Venezuela, Spain, Puerto Rico / USA and Colombia actually [definitely musically] a true "Europe" and "Oversea" project as well!