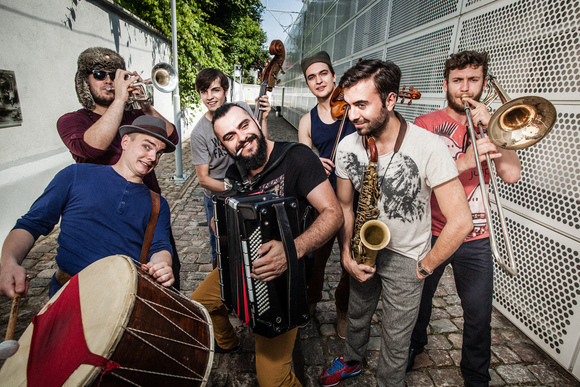 The band is playing on main stages in Poland since 2007, spreading fear among the amateurs of klezmer & balkan grooves. The perfect word to describe BUBLICZKIs genre is turbo folk - a lot of fun, folkbeats and wet shirts after shows!

The group gather within 7 musicians that have their roots mostly in Cassubia, a very important, autonomous cultural region in the North of Poland. Their music is a spicy mixture of the local ingredients specific for their root regional music with their music inspirations mostly coming from Balkan region. All compositions are made by Mateusz Czarnowski, also their leading vocal of this project. What's also very interesting, the songs on the albums will be in two languages in polish and cassubian.

Bubliczki already had some local recognition:
1st place prize in 2009 in New Tradition - Main Polish Radio Contest - the biggest award in Poland for folk groups.
2nd place prize in 2008 on "Mikolajki Folkowe" festival.
This year they've got to semifinals in "Must Be The Music 2012/2013" - TV Talent show.
They've already cooperated with Theatre "Pinokio" in Łódź, Poland making compositons for the play based on one of books of Bruno Schulz.

The group is right now in the final stage of working on their second album - Trubalkan, which will have its release date on 2nd october 2013.