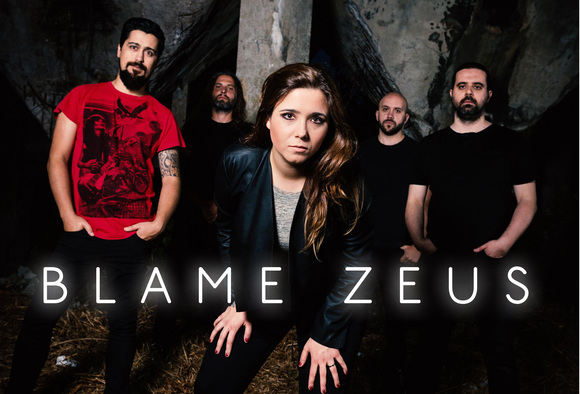 Blame Zeus is a band, from Oporto, Portugal, which began in december 2010.

With influences that range from blues to metal, progressive and alternative rock, like Alice in Chains, Tool, A Perfect Circle, Clutch and Ghost, their music does not belong to only one style.

Their main objective is to create excellent and innovative music and, above all, that appeals to the inner most profound core of our selves.
Inspired by the old school of rock and metal, but focused on doing something new, they intertwine rich melodies with interesting lyrics, creating intimate surroundings with a strong rock sound, and combining heavy guitars with the raw tone of a raspy and powerful female voice.

Important dates:
*In february 2014 they started recording their debut album IDENTITY at Raising Legends Studio.
*In april their fans helped fund the album through a successful crowd funding project.
*In july they signed with portuguese label Raising Legends Records. *Their first single, “Accept”, was out on the 3rd of august, through a lyric video.
*On the 1st september 2014 IDENTITY, their debut album, is officially released.

*On the 4th of March 2017 they released their second album "Theory of Perception", independently.

Since 2013 they have been an assiduous presence in many important portuguese stages and festivals, having played with bands such as Lacuna Coil, Cellar Darling, RAMP, Childrain, Hills Have Eyes, Sacred Sin, Heavenwood... among many others.