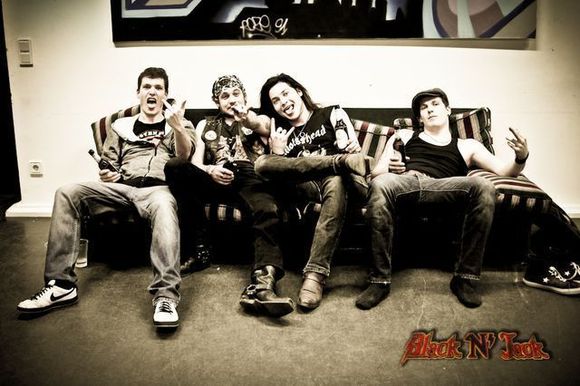 A bold hypothesis, considering that Joe, Eddy, Izzy and Götz founded BLACK 'N' JACK in September 2010 after the demise of their previous bands.
Too daring? As if!
BLACK N 'JACK can look back in spite of their short time working together on having played shows with nationally known acts such as the Echo winners of Bakkushan, Kneipenterroristen from Hamburg and Montreal, gaining new fans at each concert.
The sound of BLACK 'N 'JACK is fully trimmed on old school rock n' roll. Pioneers are the sound and lifestyle of the '70s and '80s, whose spirit revives in the songs of BLACK ' N 'JACK: noisy, dirty and nasty.
BLACK 'N 'JACK do not hide behind the musical taboo word in recent years, they live rock n' roll, and they prove it show after show with energetic fresh and natural performance.
BLACK' N 'JACK take their audience on a journey into times believed dead: The times of Sex, Drugs & Rock n' Roll and honest, sweaty invigorating music full of passion.

The beginning of 2013 brought some changes to Black N Jack. First of all founding member and bassist Eddy left the band for personal reasons but was soon replaced by the incredible El Bambino who is now about to kick ass with the Black N Jack family.
In January Black N Jack recorded their six song debut EP called "Boozebreaker" which will be released at the end of the year. With new bassist and their debut record at hand Black N Jack are about to hit the stage again, anywhere, anytime. So be aware and prepare for an overdose of fast forward rock n roll!