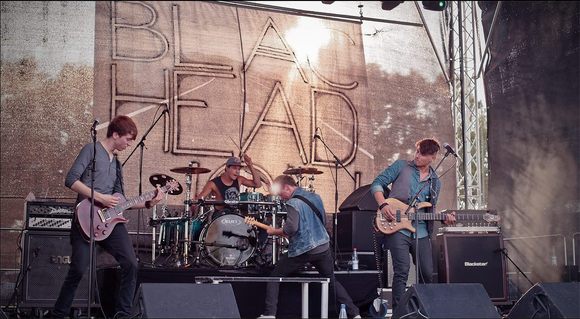 BLAC HEAD LION is more than a band.

It is composed of three friends that have found each other and feel the same rhythm.

Founded by the brothers Alain and Steve Silmani the trio was completed by Marco Kollenz and quickly developed a dynamic sound that is best described as new rock.

From the very beginning BLAC HEAD LION have put a lot of energy into their live activities which has led to numerous accomplishments. After having played shows with bands such as Status Quo, Michael Schenker, Foreigner, Mother's Finest, Garry Moore, Uriah Heep... BLAC HEAD LION were booked by Marek Lieberberg productions as the opening act for Airbourne for their sold out show in Aschaffenburg Germany. With their powerful performance they made such a good impression on the crowd, that they gave autographs to hundreds of fans after the show.

Alongside their numerous live activities the three artists released their first official misicvideo for their debut single 'me and myself' and were immediately added to the rotation at RCK.TV

Currently they are celebrating the release of their debut '5 YEARS IN 50 MINUTES' which delivers a great mix of 12 tracks ranging from alternative to catchy rocksongs to sing along to.

For the production of '5 YEARS IN 50 MINUTES' BLAC HEAD LION got together with one ot the most influential producers of the UK, Romesh Dodangoda, who has worked with bands like 'Bullet for my Valentine, Lostprophets, Motörhead, Twin Atlantic and Funteral for a Friend' recorded in his Longwave Studio as well as the legendary Monnow Valley Studios in and around Cardiff UK.

The result is a longplayer with such an addictive and impressive sound that is rarely heard on a bands debut!

'5 YEARS IN 50 MiNUTES' was released in October 2012 through the record label of In-Akustik.