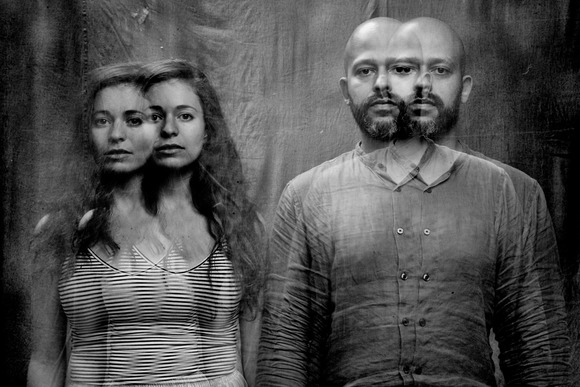 30 WORD PERFORMER DESCRIPTION: Bitch 'n' Monk are a duo whose quirky musicality and bold imagination unleash performances that use anarchic vocals and experimental flute to dance on the edge of genre.

"In the intriguing Anglo-Colombian duo Bitch ’n’ Monk Mauricio Velasierra plays assorted flutes, Heidi Heidelberg plays guitar, sings and beatboxes, while the two transform their sound into junkyard electronica through the ingenious use of looping pedals. You’ll spend a while pondering how to classify them – prog folk? Operatic post-punk? Gothic reggae? – but they know how to write melodies." - The Guardian

--------
Bitch 'n' Monk first met in a tent in 2011 and began collaborating musically within a few hours. Improvisers and non-conformists by nature they shared a love of improvisation and differed dangerously on politics. Epic night bus debates were resolved or explored through playing, improvising and composing together and the result is music both spiritual and raw, underlined by a belief that anything - however bizarre - can be spectacular if played with commitment and energy.
------

"A poison apple sound of jazz, folk and classical [...] One bite of this will send you into a lovesick coma and give you an electrifying kiss of life all at once." - The Quietus

-------
Both story-tellers and dancers by nature they have taken their music to intimate venues such as London's Green Note and Vortex, as well as the more spacious prestige of the Royal Festival Hall (on Yoko Ono's recommendation), Union Chapel and Paris' La Cigale. They have performed at the London Jazz Festival, live on BBC Radio 3 Late Junction and Edinburgh Festival, with upcoming performances at Rich Mix, Barbican Centre and Green Note.