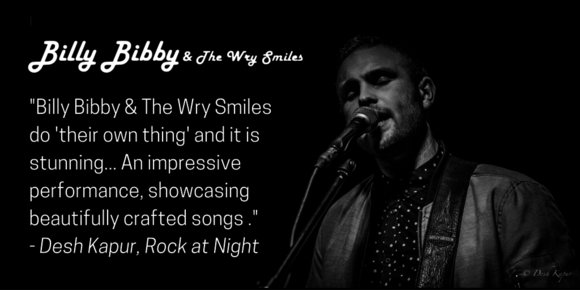 Billy Bibby & The Wry Smiles are the exciting new musical endeavour of former and founding member of Catfish and the Bottlemen, Billy Bibby.

Billy was the lead guitarist and vocalist of Catfish and the Bottlemen from 2007-2014. One of his greatest achievements to date is earning a Certified Platinum disc for the band’s Top Ten, debut album–The Balcony–which has remained in the UK charts since it released in September 2014.

Post-Catfish, Bibby spent much of 2015 writing and on tour trialling new material. That led to a series of auditions to recruit a full band with the help of Simon Jones, bassist for The Verve. The resulting project, Billy Bibby & The Wry Smiles, seek to forge their way in the industry by making meaningful, relatable records that resonate with everyone. Bibby's expressive voice surprises and delights the listener with its flawless, timeless, and effortless qualities. Influences from such greats as Elvis Presley, Fleetwood Mac, Mark Knopfler, Noel Gallagher, and James Bay are prominent, but not defining, in Bibby’s approach. The legendary Clint Boon, of Radio X & Inspiral Carpets, describes Bibby’s music as “classic British songwriting with a strong nod to Americana.”