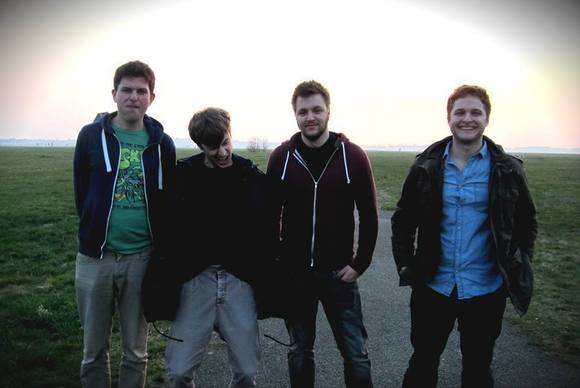 Battlements are an American-German-UK rock band based in Berlin.

Just what the world needs - another fuckin' new band right? Right...actually what the world needs now is love. Not this music nonsense - we need solid, steady lovin' for all the people of Planet Earth. We need (...And) justice for all, free contraception and four day weekends. Not to mention hoverboards - will someone invent one please??

Anyway, whatever. I'm messing with you. We DO need new bands - who's gonna headline Glastonbury when Paul McCartney finally buys the farm? I was asked to throw something together for the guys in... and I thought, 'hell, why not?'. I've known these cats for a while and I've become quite fond of their stylish haircuts and way about town.

What do you want to know about...? Well, what do you need to know? For a start they rock, and I don't throw that phrase around often so I mean it when I say it. They're a trio that play noisy, tight rock music. Brendan comes from New Jersey shore, Fabian hails from Germany and Tom's a Welshman. They met through friends and advertisements. They live in Berlin and have been playing together since February 2013, honing their sound in the practice room. They're also nice boys, work respectable jobs, always do the dishes and find time on weekends to do charity. The rest is none of your goddamn business.

I predict small-to-medium things for these guys in 2013. They spent a few days in a studio in Köpenick on the outskirts of Berlin in early July, the results of which you will be able to listen to on their Soundcloud soon. They are beginning to play live shows in and around Berlin.