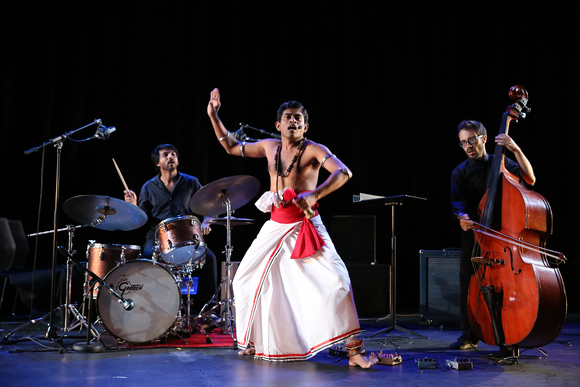 Båliphonics presents the music of the low-country Båli ritual tradition of Sri Lanka in a sublime collaboration with contemporary jazz and improvisation.

The Båli ritual is an astrological ritual and it demands the highest level of musicianship from its performers. As a result, the ritual displays the tradition’s artistry to the highest level. This ritual, however, is facing extinction due to effects of globalization and changes in modern society. With their impressive live performances, the Båliphonics shows true potential in keeping this ritual music alive in a global contemporary context.

The Båliphonics came to life in 2008 with drummer Sumudi Suraweera’s initiation, through his long standing research on the tradition of low-country ritual drumming and music. The ensemble was formed as a research project affiliated to Sumudi’s doctorate in Ethnomusicology in New Zealand. As part of the project, Sumudi brought over 3 New Zealanders to Sri Lanka for one month, to collaborate with himself (on drums) and a family of 3 ritual artists.

Since then, one of the New Zealanders - Isaac Smith - has continued to reside in Sri Lanka absorbing the local culture over the past five years. The ensemble has also been through a number of reformations during this time. A notable line up is one as a quintet in which the group recorded its debut self titled album in 2014. The current lineup, perhaps the most powerful to date, works equally well as a quartet or a trio. As a result of working on the project over several years, the interactions among the musicians are at its strongest.

Sumudi’s adaptation of the low-country drumming language on to the Western drum set in the group opens up the possibility of transforming this age old drumming tradition onto a global contemporary stage. The raw, original chanting, singing and dancing performed by Susantha Rupathilaka communicate the immense intensity and power of ritual music while being visually breathtaking. The experimental sounds and sonic textures provided by Isaac illustrate the high level of musical dialogue and interaction between the two musical cultures.

Recent concerts of Båliphonics at local festivals and the Goethe Institute in Colombo have been received and regarded very highly by local audiences. The group has also been active in the South East Asian region over the past two years with concerts in Singapore and Malaysia.

It is time that audiences outside of Sri Lanka experience the Båliphonics, witness the traditional boundaries being pushed, and transcend themselves into the spirit of the Sri Lankan ritual!