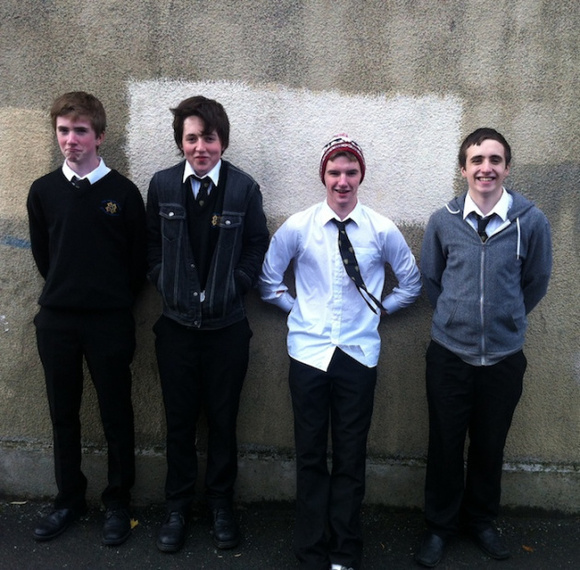 Bagels are a young band from Dublin, Ireland.

Formed in 2011 on And So I Watch You From Afar and Foals covers, the band has strong roots in Indie Rock as well as Post Rock. Influences include The Joy Formidable, Two Door Cinema Club, And So I Watch You From Afar, Two Door Cinema Club, Russian Circles, Foals, Adebisi Shank and The Cast Of Cheers. Their original sound is represented on the Stand Tall EP, a crushing blend of Wall Of Sound post rock and catchy indie rock lines.
Their live show is always received as hugely energetic yet tight and often unpredictable because of the blend of Post Rock, Indie, and Ambient Synth sounds. A lot of dancing, sweating, and shouting is often involved.

"The lads will have to make a serious effort to stand out from the crowd and they have three things going for them that most of the free stuff online doesn’t: huge talent, a killer debut EP and epic live performances."

Bagels are a band hailing from Dundrum in Dublin. A young group of lads, Adam Redmond (guitar/vocals), Jack Rudden (bass/vocals), Ciarán Byrne (guitar) and Jamie Kealy (drums) play a clever blend of crushing post rock, combined with upbeat indie and alternative sounds. Bringing a very new and quite Irish-influenced approach to the table.
They have built up a reputation over the past year or so of being an outstanding live band with great energy. They have impressed crowds in the Academy 2, The Sugar Club, The Spirit Store and most recently with a stellar performance at Sweeney's Dimestore. All packed full of energy, sweating, and unpredictable performances. Their biggest gig to date was supporting God Is An Astronaut in a packed Spirit Store in Dundalk.
Their Debut EP "Stand Tall" was recorded with Torsten Kinsella of God Is An Astronaut and released in October 2013. A blend of instrumental And So I Watch You From Afar and Adebisi Shank, combined with more indie rock Foals, The Cast of Cheers, Two Door Cinema Club, The Joy Formidable, the EP hasa brilliantly original sound. The title comes from lyrics in the song "Heads High, Feet Firm" which gained them a lot of recognition from it's frequent airplay on Phantom FM as well as Track Of the Month for January 2014 by Phantom's Zach Buggy. "Their EP is Phenomenal.... They're not afraid to go for the indie rock route of the weird instrumental influences they have... They've really found a nice balance of it and made it a brand of their own"
The band are currently in writing for their new album to be released next year and preparing for summer shows such as a slot at Wicklow's Knockanstockan festival.