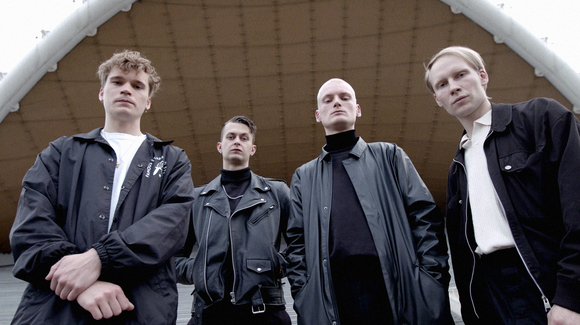 Frankly, it’s a bit difficult to find ba. using search engines, but don’t let that put you off.

Benas Aleksandravičius, the singer, songwriter and driving force behind this band (it’s called after his initials, if you haven’t guessed it already) is one of those jaw-dropping success stories – when he broke through in 2013, a couple of months later he was getting hundreds of thousands YouTube views – at tender age of 16, without record label backing or conventional promotion, this indie rock singer managed to capture hearts and minds of young internet generation.
Having dropped out of school to concentrate on music (still a pretty unusual move in Lithuania), Benas’ atmospheric tunes with nods to post-punk quickly drew comparisons to the likes of Bombay Bicycle Club – the video for Sugebėt pasikeist (To Be Able To Change), released in 2014, has now been viewed more than a million times on YouTube, no mean feat for an alternative artist from a country with just three million inhabitants. However, anthemic indie of debut EP Raktas (The Key, 2013) and soon gave way to somewhat harsher, grunge-y guitar sound of full-length album Rasti/Pasiklysti (To Find/To Get Lost, 2015). Singing exclusively in Lithuanian, Benas and his cohorts soon became talk of the town as one of the most exciting live bands around.
On the stage, he is truly a man possessed by his art – seeing Benas perform is an intense experience, with stream-of-consciousness lyrics (which, one may speculate, are difficult to decipher for even the most loyal fans) adding to his weird charisma. In 2015, ba. won the audience vote at Tallinn Music Week showcase festival (Estonia). Saulėsužtemimas (Solar Eclipse) EP followed in 2016. Having played the biggest Lithuanian festivals in 2016, ba. finished the year with their biggest solo concert to date, selling out Loftas (Vilnius’ most important alternative music venue) and performing in front of 1000 ecstatic fans. Judging by their reaction, it’s more than likely that bigger things are on the cards for this band.
Garsiai Mąstau EP followed in early 2017, showcases (Europavox, Reeperbahn, showcase in Poland), videos, big concerts and festivals. This is rough, honest, no-holds-barred music that resonates with alternative audience in an impressive way.
In 2018 the band had 5 years birthday. For this band released best of singles cd together with photography book (all units were sold in couple of weeks), also presented documentary movie of 5 years on the stage in the biggest cinema hall in Lithuania (it was sold out) and ended 5 years b-day with the biggest solo concert for 2000 people. For this summer it is planned couple solo concerts, performances in the biggest Lithuanian festivals, also new album.
In 2019 ba. released their second full album H8 and had a solo show for 3000 people. Now the band is planning a tour in Europe during autumn. Ba. presented their new album in the biggest festivals in Lithuania, in Reeperbahn festival in Germany and also in Zandari festival in South Korea.
2020 and 2021 was dedicated for creating new album "Nauto" which will come out on 30th of September 2022.
Till this album ba. was playing in the biggest lithuanian festivals. Also the band made the biggest show in Vingis Park in Vilnius (the biggest park for concerts in Lithuania). It was historical show because only 3 lithuanian bands had made concerts in this outdoor venue.