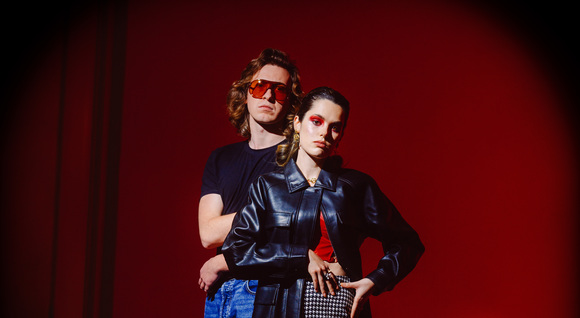 ATZUR is probably the only Spanish-Austrian duo in the world of indie pop that met on Tinder.

With songs written from different places mentally and emotionally, ATZUR dives deep in the extreme feelings, where wild and raw drums meet dramatic and epic melodies. Patricia, who graduated in Fashion Design and is head of her own fashion label, is a fierce frontwoman, with a strong sense of aesthetics that flawlessly unites music with fashion. Paul, on the other hand, is a renowned drummer in the Austrian indie scene, having played for bands such as Cari Cari and At Pavillon. Together, the duo creates a sound that lives between north and south, warm and raw, free and epic.

Founded in Spring 2019, the band signed a record deal with the austrian label Seayou Records and released their first single “Running”. With a video produced in Spain, the single quickly entered the charts of Austria’s Radio FM4 and Germany’s EGOfm and stayed there for several weeks. With their debut EP “Flesh, Blood, Bones” they presented themselves for the first time in 2019 at the Waves Vienna and Reeperbahn Festival. The pandemic was clearly a challenge for the young duo, but still they played at festivals like Poolbar, Future Echoes, Reeperbahn (for the second time again in 2021) and the online versions of Live at Heart and Liverpool Sound City. They have been internationally supported by their #INEStalent nomination. No matter the stage - ATZUR has the capacity to successfully deliver a fresh performance in any size of venue.

The duo steps into the future with a new EP. “Big Delirium” will be out in June, giving us a taste in March with the single “Do you feel the same?”. A song about falling for someone and the excitement and adrenalin that the other person may feel the same and how it scares the shit out of you. Upbeat, energetic with indietronica vibes its a great soundtrack for you to put your headphones on, close your eyes and dance around your bedroom.

Catch them live next on the 31st of March in Vienna or at SHARPE Festival 22./23. of April in Bratislava.
extraordinary universe, Atzur is a huge, sturdy band, built for arenas.

"The music of Atzur is as graceful as a mythical dialog between the sun and the moon, often focusing on the biggest and most boundless of emotions. At the same time, this is a sound that gets so up close and personal that a listener can become one with it." REEPERBAHN FESTIVAL

"(...) is like the soundtrack of a lucid dream, an introspective immersion in one’s own soul and a wake-up call from the lethargy of complacency." AUSTRIAN MUSIC EXPORT

“Between Florence + The Machine and Woodkid, Pop and Punk - Attitude: The music of the Spanish pianist and singer Patricia and the Austro-Iranian Drummer Paul has two faces, a dreamy one and a raw one.” Poolbar Festival

“If a band performs at the Reeperbahn Festival, then that's usually not a bad indicator that they can make it big in the future. If the band then also makes music like Apparat with Soap & Skin in their dark song, which was used as an intro for the serial box office hit Dark - then you can almost be sure that the band is doing quite a lot right.” Eldoradio