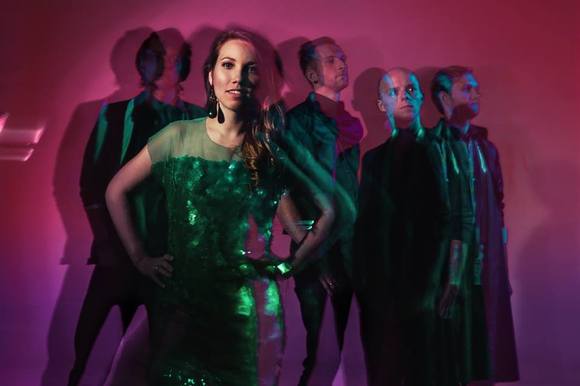 Astro’n’out are one of the best-selling artists in the Latvian indie/pop scene.

They first appeared in 2003 when a young girl named Māra with an extraordinary voice penned an instant radiohit about a shady district of Riga, after that many Astro’n’out hits had beaten Latvian radio top first places for long time.

In 2007 Astro’n’out was nominated for “MTV Europe Awards” in nomination “New sounds of Europe.” Year later they were invited to perform as special guests in the most successful Latvian band “Brainstorm”/ “Prata Vetra” tour “Tur kaut kam ir jābūt”.

In the end of 2008 the second album “Astro’Acoustic” was released and in the end of 2009 - album “Geometrija”. Both albums were nominated for Latvian Music Industry Awards as “The best alternative album 2008” and “The best rock album2009”.

Astro’n’out have written original music for several documentaries- such as “Rīga, Mana Rīga” / “Riga, my Riga”, “No cita skatupunkta”/ “From another point of view”, “Nestāstāmie stāsti”/“UnTellable stories”, “Sūnas aug ziemeļu pusē”/ “Moss grows on North side” and others. Songs by Astro’n’out are often used for several ads and charity projects as well.

Astro’n’out have performed, literally, at every festival and venue in Latvia – “Summer Sound Festival”, “Positivus festival” “Fontaine festival” and many others. The band has been nominated for theannual Latvian Music Industry Awards with every record they’ve released.

In the end of 2012 they released their fourth album “Lauvas” which was nominated for Latvian Music Industry Awards in four categories.

In the spring of 2013 Astro’n’out participated in Tallinn Music Week with two showcases. In August 2013 theyperformed on the second stage in the biggest Lithuanian festival “Galapagai”.

In August 2013 Astro’n’out will conclude “Information days” in the city centre of Berlin organized by the Germany Finance ministry.

Recently the band is working on their first album in English “Lion’s Share”, which will be released by November 1st under “Avantis Promo” and they are the confirmed artists of Vilnius Music Week showcase.

Since the band is always embracing new opportunities and challenges, they have performed in different countries in Europe and even had a tour in China once. As well they pay the most attention on their live shows and appearance in mass media, as Astro’n’out has become a brand name in the local auditory.