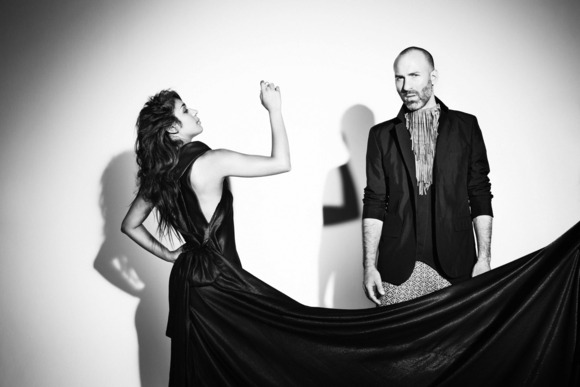 “When we start to play a melody, on the guitar, piano, drums or whatever, and it clicks for us, it becomes a mission.

Once we start it, we have to continue until we finish, even if it takes hours, days…”

French duo As Animals could be labelled indie, pop or dreamy alternative rock. It’s for the listener to decide.

Inspired by the art they admire, films they watch and music they listen to. You can hear the love they have for Bjork, The Knife and Feist battling through their sound and their visuals have a taste of the directors they enjoy; Kubrick, Terry Gilliam and Oliver Stone.

The pair met when Fred caught a glimpse of Zara singing at a gig in Paris and they started writing together in 2011. As cliché as it will sound, it just fit for the pair.

Fred (Frédéric Grange) is a songwriter, producer and multi-instrumentalist who grew up in Paris, France. In addition to being classically trained on the guitar and piano, Fred can play the bass, keyboard and drums.

Zara (Zara Desbonnes) is the voice of As Animals. Born and raised in Montreuil, a suburb in the east of Paris, Zara was surrounded by encouragement for her artistic desires by her fashion stylist and seamstress mother. Her imaginative expression was always smiled upon.

With Fred writing the music, Zara scrawling the lyrics and them working together on the overall creation, they have found something that truly works and gives them both the voice they have been looking for since their artistic journeys started.

In 2012 the band signed to French label Atmospheriques and started working on the music we hear now.

“We didn’t want to rush anything. It had to be right. That is why in 2013 we are only now announcing our debut”

As Animals will be releasing their debut E.P. titled ‘Ghost Gunfighters’ in early 2014.