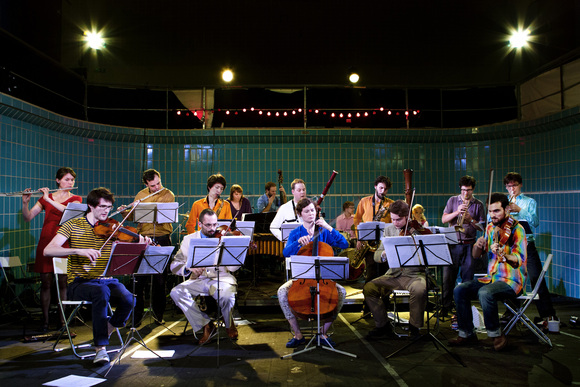 Berlin’s Andromeda Mega Express Orchestra is made up of 18 young musicians with a multiplicity of musical and cultural roots.

Founded in 2006, the formation plays the ensemble director and saxophonist Daniel Glatzel’s compositions.

After the incredible success of the first albums Take Off! (2009) and BUM BUM (2012, both alien transistor) the Andromeda Mega Express Orchestra remains reliably unpredictable with their third album Live on Planet Earth (2014). Here, the exceptional formation leaves the safe studio environment behind and enters the stage to underscore and reaffirm its position as one of the leading large ensembles for extravagant soundscapes of everyday life.

Cooperations with The Notwist (The Devil, You and Me, Music No Music), Efterklang (Piramida) or recently with Sinfonietta Riga are rferences for the musical diversity of the orchestra.

At home in concert halls, jazz clubs and big venues and pop-festivals, this unique hybrid of big band, chamber ensemble and progressive rock orchestra is an event that mixes up and re-orders old expectations and habits.