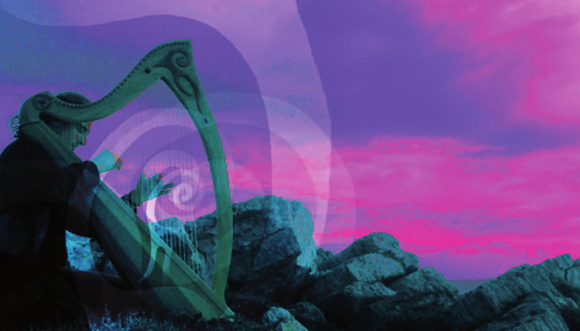 Andrea Seki is an harpist and harper, composer, author of music and lyrics, specializes in celtic and neo-celtic harps.

He belongs to the new generation of the contemporary bardic harp tradition.

Andrea Seki is an harpist and harper, composer, song writer and singer author of music and lyrics, specializes in celtic and neo-celtic harps and he belongs to the new generation of the contemporary bardic harp tradition.

His personal and visionary style is now recognized and appreciated internationally. From an early age he creates music and sounds, personal and evocative music composed of a different nature, songs and ballads, suites of dances and mysterious dreamlike atmospheres.
His compositions are rich of different influences of his musical journey ranging from ancient music of the Middle Ages, Renaissance and Baroque music to modern and progressive psychedelic, to the traditional folk music of celtic countries, where he lived, until the classical indian music. He has made several albums, music for theater, dance, poetry and documentaries, as well he wrote a book/cd dedicated to the Celtic harp and the magical world of the Bards.

In 1998 he founded in french Brittany Elfic Circle Project, that gathered over the years collaborators and musicians from different musical and cultural areas, to share with him the same dream, that has its roots in the ancient past and tends towards the future...

He has collaborated with various artists and bands of different genres like the historical galician celtic folk group "Luar na Lubre", the jazz world pop keyboard-player Delmar Brown, Myrdhin, the great breton singer Kristen Nicolas and many others.

His musical universe is very rich of imagination and instrumental originality, inspired by nature, oceans, forest and ancient myths and legends and his message in the music and in the lyrics are 'highly topical'.
His insprations are adressed to all those, who feel the need of the return to the connection with nature and the cosmos, in accordance with and for the preservation of the planet and its cultures and traditions in the contemporary and future times.

Andrea is currently engaged in different activities, concerts around Europe as a solo artist (celtic harp effect and vocals) and with different formations in duos, trios, etc. .

He has just finished to record and produce his new album "SON ATLANTEL", entirely dedicated to the poetry and the wildness of the western coast of the breton atlantic ocean. The sound of this album is leading us to the cliffs, winds, waves and lands end of the Armoricain Brittany (Finistère), between evocations of ancient and legendary civilizations, marine atmospheres, colors and lights of the sun and nights of atlantic moon.