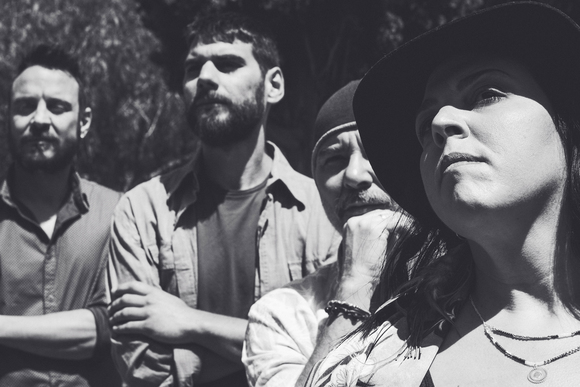 ALTRIBE is a four-member band.

Based on the blues and beyond that, their music has a lot of blues, pop and psychedelic elements, as well as lyrics that describe the state of the big city’s modern man.
The composer Fiona Lambrides on vocals and the acoustic guitar, a voice that is related to the warm, doric, black voices of the blues. Apostolos Karatzas on the electric guitar, whose personal style and sound brings out the rock-psychedelic side of the band. John Gardicles on the electric bass, combines power and emotion in his grooves. The founder of the group, composer/lyricist Albert Panagiotopoulos on the drums, expresses the technique, the explosiveness and aesthetic simplicity that characterize Altribe. The band's new album "SPOOKY TRAIN" released in 2016.

Altribe have an official permission by The Rolling Stones’ publishing company, for recording their successful version of the song "Gimme Shelter". They have also been awarded by A&R American companies (TuneHog, Taxi). They have reached #1 (locally & nationally) on the ReverbNation's Top 10 Rock Charts. The British "Stencil" magazine and many Greek newspapers and magazines, as well, have featured extended overviews of the band. Songs and interviews of the band have also been hosted by fm and internet radios.

They have performed in many bars, clubs, music halls and festivals in Athens, all around Greece and abroad, playing their original songs and selected covers.