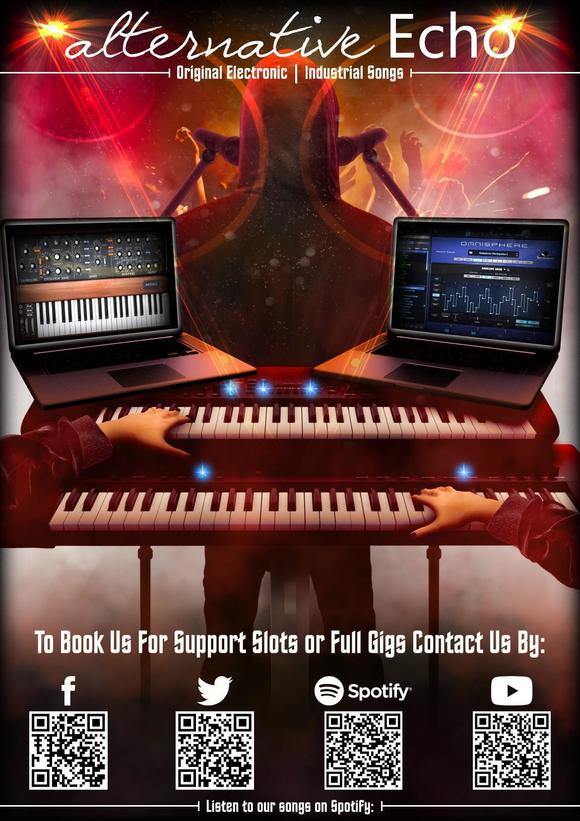 Alternative Echo aka John Roberts is a solo artist who writes all his material on Cubase.


John has always been into music and started writing songs from an early age. John and an old school friend Ian Jackson recorded a song at Twilight Studios in Salford entitled “Lakeside” (well before the shopping centre!) which was played by Pete Mitchell who was then a DJ on Key 103.

Not long after, John was introduced by his cousin Colin to a friend of his who was looking for a singer for his project. The friend, Paul Wallworth and John then teamed up to form a duo called Big Town and recorded at Paul’s home using a 4-track studio.

Paul was the songwriter and John wrote the lyrics and sung. At the time, a lot of the people that heard us likened us to The Smiths/New Order. We were flattered by this comparison.

Paul and John then went their separate ways but are still in touch and there is a possibility that we may work together again at some point.

Originally from Salford, he moved down to Kent in 2000 and got a couple of gigs using a pseudonym Matt Dene as he thought that it had more of a ring to it than just plain John Roberts. He played a few places in and around the Chatham area (where he had moved to) but decided he wanted a fuller sound and formed the band Dayfall in 2004. Matt (John) was the main songwriter and vocalist for the band and Dayfall enjoyed moderate success in and around the Kent/London and surrounding areas. Dayfall played at the Crown & Anchor, the Bull and Gate in London, and played the famous Cartoon Club in Croydon. Dayfall were a unique band in that they preferred to play their original music, but as is quite often, a lot of venues would only entertain you if you played covers. With that in mind, Dayfall decided to play well known songs but not by run of the mill artists. So Dayfall used to regularly cover Firestarter by The Prodigy, Sonne By Rammstein and Pure Morning by Placebo to name but a few. Dayfall were also honoured to play the 45 Nations Flag Day in Boulogne, France, on behalf of the United Kingdom.

John went solo and again was signed in 2011 to a small label called 66Khz where a one-off single was released entitled “Alone”. John however, kept the Dayfall name. The single didn’t really make any impact and this is a shame but John will re-record some of the older songs at some point.

John then decided that he would like to take a back seat in terms of performing and decided that he would prefer to concentrate on the writing of the songs and enlist the help of female vocalists. This was where Alternative Echo was born and initially, things started off well but other vocalist’s other commitments meant that the project was then scrapped and John went back to writing material that he would eventually sing.

John recorded two songs at Ten21 Studios in Maidstone. The songs recorded were “Gasoline” and “Heart of Stone”. These songs were produced by Sean Kenny.

John contacted Chris Payne on Facebook (Chris co-wrote Fade to Grey) and who also played keyboards and viola with Gary Numan from 1979 till approximately 1990. Chris was running a song writing workshop at the time, at his home near Rouen, France.
John went over and recorded five tracks initially. This was in April 2015. John ten went over again in the August of the same year to record an album, and some of the songs which were recorded will be included on the Alternative Echo debut album, to be released via Nub Music.

In late 2016 John was introduced to Nathan Timothy from a friend of his called Stefan. Stefan met Nathan when Nathan went to Stefan’s place of work at the Dover Christchurch Academy to write a song with the students as part of his anti-bullying campaign. Stefan gave Nathan a CD containing some tracks that had been written by John.

Nathan was impressed and a meeting was arranged at Bluewater with Nathan with Stefan in attendance. Nathan agreed to produce the remaining songs. The album was finally completed in April.

Alternative Echo released the debut album with Nub in August 2017.