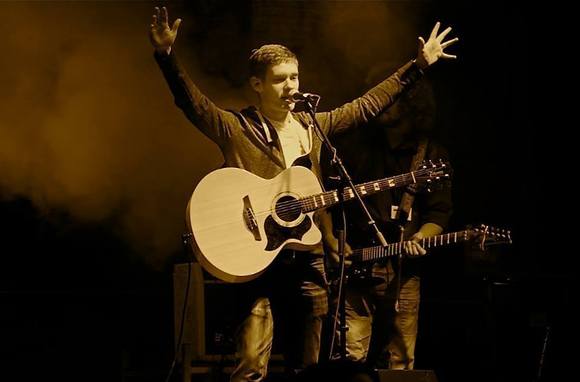 Aidan Logan is a Singer and Songwriter, who plays with a backing band, totalling 5 members.

he has experience playing in front of large crowds and is earning a reputation as a high energy showman. His music is melody driven, with catchy hooks and strong lyrics, fits comfortably in pop or singer/songwriter events.

Influenced by the great American performers, such as The Killers, Billy Joel, Bruno Mars & Garth Brooks, Aidan's songs and performances are both full of energy and full of meaning. He has spent years honing his skills on the local circuit, playing in several of his home town’s greatest live venues, from The Empire to the Mandela Hall, and many places in between, sharing the stage with artists such as Hologram, Conor Scott, Soak, Two Door Cinema Club and The Late Twos. Aidan has played several big audiences to date, notably the Big IF Concert in Belfast's Botanic Gardens, in which the young musician performed to crowds of thousands, an experience Aidan has described as “Inspirational” giving him a hunger for more.

The E.P has been well-received since its release, with songs receiving glowing reviews from GoldenPlec & Chordblossom among others as well as air play on BBC Radio Ulster. In addition, ‘Matter of Fact’ received the ‘Single of the Week’ accolade from Belfast radio station Blast FM, and ‘Tell Me’ was playlisted on Queen’s Radio.

Keep your ears out for Aidan Logan, Belfast’s best kept musical secret, for 2014 will be his year.

Aidan will be touring later in the year with his five piece band to coincide with its release. At the beginning of 2013, Aidan gave away an acoustic version of live favourite “Standing Next To Me” for free on the internet. The release was met with enthusiasm, with the song eventually reaching #3 on the Hype Machine Twitter Chart, a remarkable achievement for an unsigned artist.

The first single from the E.P, the bouncy "Tell Me", was released in May. The track was well received, receiving coverage from blogs in both Ireland and the UK, such as Chordblossom, The Metaphorical Boat and Rock and Roll in My Soul, as well as gaining local radio play.


“There’s no gimmicks, no style stunts, no image peddling, just songs – and bloody good ones at that.” – Rob McNamara, GoldenPlec.

"(Tell Me)...has a feel of effortlessness which would make some other writers feel a bit jealous.” – Al Gilmore, ChordBlossom.

“(Aidan)… brings a youthful, upbeat energy to his songs.” – Ramona, More Than Bullets and Bombs.