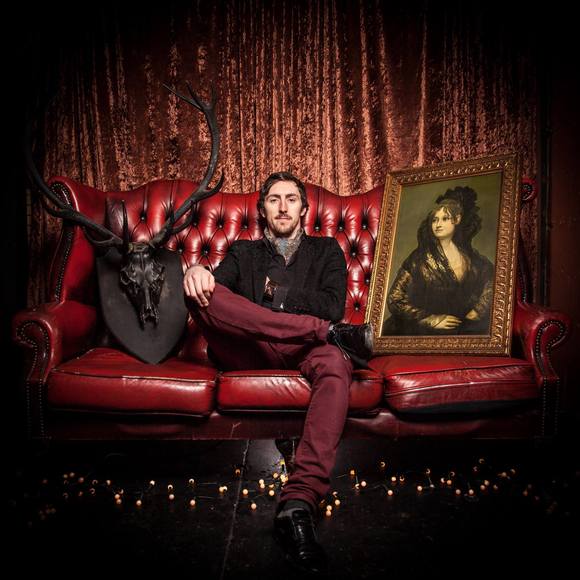 "The Pop/ Folk singer/songwriter has been compared to the likes of Thom Yorke, Rufus Wainwright and Paul Simon, with an eclectic mix of sounds spanning from Pop/ Folk to Spanish influences." Aaron Anthony is a singer/songwriter and multi-instrumentalist hailing from the heart of Dublin, Ireland.

His debut solo performance was none other than The Olympia Theatre. Opening the night for 'The Last Waltz' live has marked him a huge presence in the songwriting world and on the live stage. He has gone on to tour as support for 'The Last Waltz' into 2012, spanning an array of venues nationwide. He has gained a dedicated following and has multiple festivals & shows under his belt including, Castlepalooza, Offaly, Strawberry Fest, Wexford with Status Quo, Jack of Diamonds Festival, Dublin, Knockan Stockan, Wicklow & Electric Picnic, Laois.

2013 has seen the launch of his eagerly anticipated debut EP 'Seven Hours' to a sell-out crowd at The Grand Social, Dublin. Complete free Ferrero Rocher & masquerade theme audiences are forever surprised for each new show. As well as this he has enjoyed an appearance on the Irish TV program Pop4 & playing support to world renowned musicians including, 'Kodaline', 'Morrissey & Marshall', 'Cathy Davey', James Walshe of 'Star Sailor' & 'Hozier'.

He has enjoyed a host of sold out shows in the last two years, including two Whelan's dates, his Christmas Show in Bewley's Cafe Theatre, 2014, The Workman's Club, Dublin; The Mercantile, Dublin & The Harbour Bar, Bray. As well as gaining a short residency with his band in The Mercantile during the summer months.

Now residing in Lyon, France, Aaron has taken his music to the European stage with back & forth shows in Dublin, Lyon and also a showcase for Independent Records in London's The Half Moon Putney recently. The recording for his next single release 'Before I Go' in Jamestown Studios, Dublin continues production in Lyon with previous producer/ mixer Dean Maher and is set for release in April, 2016 with European tour dates to follow. You can keep up to date with the latest news at: www.facebook.com/aaronanthonymusic.

"We have always liked watching Aaron Anthony play live because he is one of those performers that has a specific air of confidence to match the sense of identity in his music." - U&I Magazine, 2014