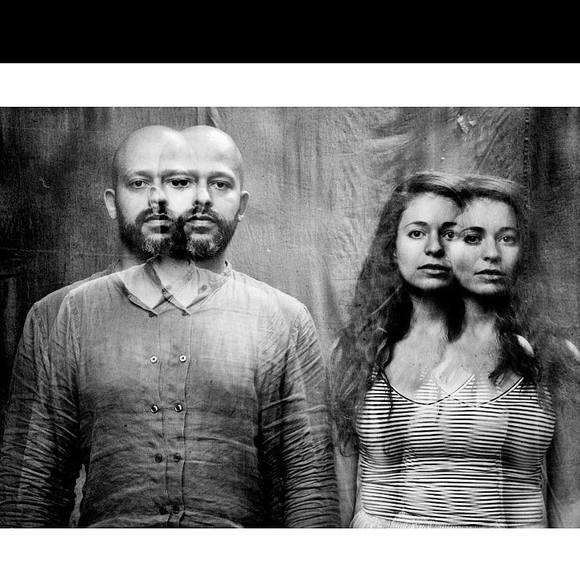 Mauricio Velasierra plays assorted flutes, Heidi Heidelberg plays guitar, sings and beatboxes, while the two transform their sound into junkyard electronica through the ingenious use of looping pedals. You’ll spend a while pondering how to classify them – prog folk? Operatic post-punk? Gothic reggae? – but they know how to write melodies" (The Guardian)

Witch 'n' Monk (formerly Bitch 'n' Monk) is the twinning of nonconformist Colombian flautist Mauricio Velasierra and anarchic soprano and guitarist Heidi Heidelberg. The driving force of the duo is a shared commitment to depict the multiverse, through an un-compromised, new musical language of composition and improvisation that travels fluidly between forms. This multiverse is constructed with a collection of Latin American flutes radically manipulated with effects and extended techniques, anarchic soprano vocals that move seamlessly and suddenly between characters and timbres, analogue electronics and a jazz-punk guitar/bass hybrid. Each limb is called upon to create the sound of multiple dimensions being inhabited simultaneously, using a myriad of control pedals and labyrinthine signal paths to orchestrate live. The essence of their collaboration is encapsulated in the name; dark and light, feminine and masculine, punk and Romantic, free-form and intricately composed. Exploring extremes and creating contrast are fundamental to their work and thus they tread upon the edges of genres. Celebrated in the jazz, contemporary classical and DIY underground music scenes they have played across the UK and Europe, at prestigious venues and festivals such as Berlin, London, Manchester and Umea Jazz Festivals, Amsterdam’s Bimhuis, London’s Royal Festival Hall and Paris' La Cigale, but also they produce avant-garde live film scores performed at communist Italian skateparks or among the thorn bushes in overgrown East London gardens.
Their compositions are shaped by often sleep-deprived improvisations which they record and use as the central musical layer that are exaggerated at points, or cut up, sampled and completely reinvented. Blocks of percussive flutes might emerge, Stravinskian melodies or bilingual voice riddles and experiments. The live performance, as a consequence, is theatrical and physical, injected with the dedication to a new musical world being born in every section. Their previous releases ‘Fulafalonga’ and ‘We Are Peering Over’ were released in 2014 and 2016 and their new album was released on John Zorn's legendary label Tzadik Records on May 22 2020 to international critical acclaim , it was named Contemporary Album of the Month by The Guardian and received the prestigious Preis der deutschen Schallplattenkritik.

"“Hard to imagine that voice, guitar and flute could groove so hard and deliver so much." (The Wire)

"An electrifying kiss of life" (The Quietus)