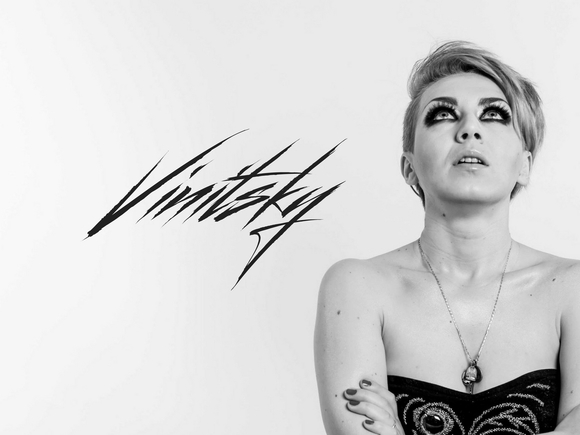 Ukrainian born, Rotterdam based Vinitsky represents at the stage the raw mix of electronic sound, powerful vocal and rocking guitars together with outstanding image and warm energy.

Vinitsky starts her music journey in a childhood where she takes a part in national Ukrainian and international vocal contests where takes grand prizes.

Since 2008 Kateryna sings and writes songs for several nu-metal bands in Ukraine and rock sound from that period will find a reflection in the latest music pieces.
In the same period she works heavily as a vocal DJ and MC all around a country.

In 2010 Kate releases her first electronic album Stereo Radio under the name Kate Orange where the same name main single gained more than 50 000 views on YouTube and was supported by David Guetta at the Spanish TV show - El Hermigueiro.

2015 - Vinitsky releases her Whisper My Name single together with social campaign for kids with Down syndrome, which aimed to support families spirit, kids creativity and financial support for educational centers in Ukraine.

April 2016 Kateryna records special EP for a Dutch referendum about Ukrainian association with European Union campaign where she represents her Ukrainian songs to Dutch audience, specially translated to Dutch and English languages for better understanding her motherland culture, mentality and feelings.

In 2016 Kate releases her 2nd album under the new name - Vinitsky as a fresh view into her music, where she combines electronic music with rock guitars shapes into commercial catchy sound.

For last 5 years Vinitsky gave concerts and DJ performances in Ukraine, The Netherlands, Belgium, Italy, Germany, Slovenia, Bulgaria and her geography is growing.