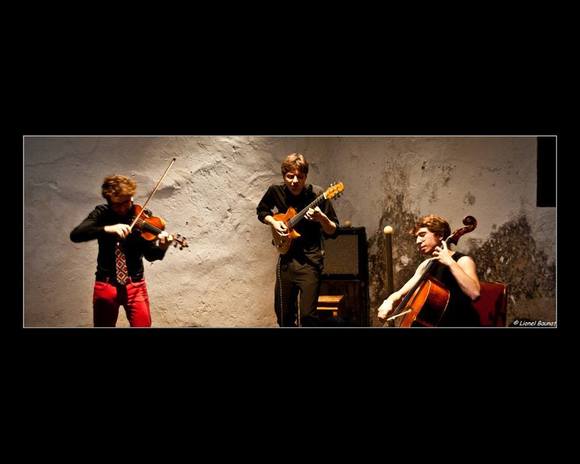 « Three friends, three young musicians, all of them string players - aren't we all one great family?

And so much music, emotion and rigour in them already. The writing displays great sophistication and a rare maturity ; there is a chamber-like quality to the playing, with mutual listening at the highest level ; the duets, solo interludes and improvisations are simple, yet daring ; the phrasing and "dancing" exhilarating, intense and swift ; the music is lyrical, profound, adventurous - as dicey as life. Listen to them - they are the genuine article! »
Joelle Leandre

Théo Ceccaldi Trio, one of the foundations of the Tricollectif, is a small strings orchestra, inventive and lively, resting on a collective and risky business, and knowing when to exchange roles to create colorful variations. It unveils an instant music, in which themes, great escapes and discussions spin and melt. It discovers a free and colorful world of unexpected instrumentation, creating surprise and contrast from a thorough writing, in a search of moving sounds, and through a powerful and communicative energy performing live. A creative music, never abstruse, given by impudent youth. A lyric and engaged chamber jazz, both noisy and enraged.

Carrousel, their first album, released in june 2012 with the Ayler Records label, was voted « Révélation » in Jazzman/JazzMagazine.
Their second album « Can you smile ? », accompanied by the double bass Joëlle Léandre was released in december 2013 with the Ayler Records label, and was a « CHOC » in JazzMagazine, « SELECTION » in JazzNews and obtained the « ÉLU » prize in CitizenJazz.