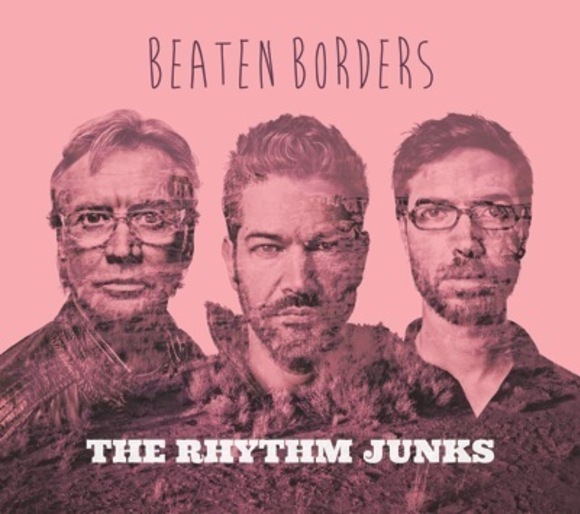 The Rhythm Junks released two albums in a line-up with a horn section.

For the new third album 'Beaten Borders' however, the band was reduced to a trio (vocals/harmonica/bass/drums). An unusual line-up resulting in a very particular sound. The band members are not quite rookies, they have been playing with numerous international artists like Milow, Selah Sue, Zap Mama, Little Axe, Eugene Chadbourne, El Fish, The Bony King of Nowhere, Bob Brozman, Garland Jeffreys, Toots Thielemans,... The Rhythm Junks have been touring in Japan, China, Kenya, Germany, Switzerland, France, Belgium, the Netherlands, Italy, Poland, UK,...

Think about pickles when you try to understand The Rhythm Junks. They are the tasty combination of three vegetables one would not easily combine: gherkin, cauliflower and silver onion. Only when these three vegetables come together in this recipe, one will feel that the whole of this combination tastes better than the sum of its parts. The Rhythm Junks are much alike. The three band members differ quite a bit in musical background, but they create something that transcends the addition of their genes which are made out of jazz, pop, rock, funk, soul and blues. Three musicians, three generations, and yet looking in the same direction.

Moreover, their musical interplay is a gate into a world where everything is different. Behind that gate, the only sure thing is that there are no certitudes. In the world of The Rhythm Junks all of a sudden the jazz man can be the one pleading for more electronica or pop segments. In this world it is possible that the junior appears to have the oldest soul. It is a world where music is the lingua franca and where life is fed by groove and, indeed, rhythm.

The Rhythm Junks started off with Steven De bruyn and Tony Gyselinck. Together they took notice of the fact that Belgian artists who are making a difference outside of Belgium are the ones creating something original. This became the mission statement for The Rhythm Junks: an original mix lacking borders or genre classifications, but still having international allure and ambition. The Rhythm Junks explicitly never wanted to be a blues band, despite the harmonica. They are musical adventurers taking down all walls between musical genres, stone by stone. Beaten Borders, so to speak. This boundless ambition already brought The Rhythm Junks to China, Japan, Kenya, Germany, Switzerland, the Netherlands, France, Poland, Italy and the UK.

For their third album Beaten Borders, The Rhythm Junks have stripped down to a trio. The horn section from the previous albums Virus B-23 (2004) and Pop Off (2007) was shelved in favour of an extremely wide space. Nevertheless, this didn’t lead to an urge to start filling everything up. On the contrary. The lighter parts were cut down and a general direction came up, focussing on the songs. The music consciously was kept more intimate, solo’s had to move out of the spotlights, the songs found the feeling of a musical daydream, and yet The Rhythm Junks keep off the beaten tracks. ‘Maybe Slowly’? Right about time… On Beaten Borders The Rhythm Junks succeeded to record an album with less, resulting in much more. This might as well be their best album so far.