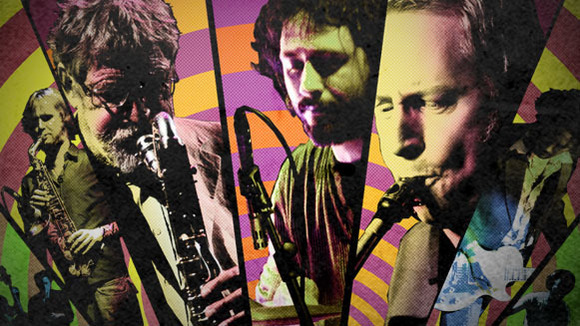 The Grand Cosmic Journey Formed in 2004, the Benoit Martiny Band's roots are in the dusty garage of its leader's house, in the small Luxemburgish village of Rameldange.

Through the years, drummer Benoit Martiny developed
with his bandmates an original musical style influenced
by the mid-1960s.

The Benoît Martiny Band was First Prize Winner of the
2008 Amersfoort Jazz Talent Award, and has been
performing in many different venues in the
Netherlands, Luxembourg, Germany, Hungary, France,
Belgium, and Italy.

The project is an attempt to revisit these
golden years where music broke the boundaries of art
and cultures, where music was imagined by some of the
most innovative composers and sound designers of
these last decades, such as Sun Ra, Charles Mingus,
Jimi Hendrix, Hermeto Pascoal, and Frank Zappa.

The origins of vjing date back to the New York club scene of the 70s that's why it was mandatory for us to present a vj set to illustrate this concert and recapture the spirit of those years. Following the venue the set is adaptable for a performance in situ or using the stereoscopic 3D effect anaglyph.