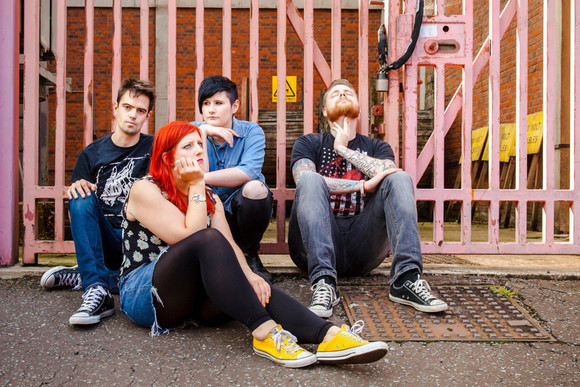 In 2009, London got hoards of new residents.

Two guys and one gal in particular arrived and scoured the internet looking for band members. Joe, Ben and Emma showed up at a Leicester Square pub and, after a few pints talking music, found a lot of common ground in bands such as Jimmy Eat World, The Offspring, System of a Down and Incubus. With a list of cover ideas and a name, they started The Frayed Laces.

After years of gigging the line up re shuffled and Chelsea joined the line up as the bassist in 2015 and what an incredible asset she turned out to be!

The foursome (tee hee) plan on taking over the world one shitty gig at a time. Doesn’t matter if it’s just the barman at the venue, we’re still going to give it everything.

2015 is a busy year for the band. Their first studio EP will be recorded and released. They’re also planning a music video and nationwide tour in support of the EP. There will be plenty of chances to see and hear the guys this year. Keep up with them on Facebook, Twitter and Instagram.

Here are some recent reviews

Live review as Band of the week at the famous Fiddlers Elbow: http://goo.gl/VYHBw1