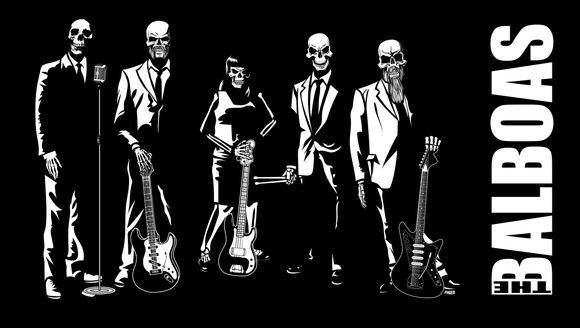 Armed with the instruments and back beat of 1960’s era west coast acts, the Balboas song writing and performances infuse the angst and irreverence of late 70s and 80s punk rock into a distorted, reverb soaked, barrage of sound. Over 20 years and thousands of miles on the touring circuit, the Balboas have forged a sound of their own, earning a reputation as a blazing and bawdy live act characterized by a greasy American middle finger. Despite establishing their own unique sound, the Balboas have complimented some of the toughest, grizzled, and road worn touring acts in the U.S., having shared the stage with garage-rock icons the Woggles and the Fleshtones, rockabilly giants Southern Culture on the Skids and the Flat Duo Jets, southern rockers Nashville Pussy and the Drive-By Truckers, punk legends Agent Orange and the Dictators, and the masters of surf guitar, Dick Dale and Slacktone.

The Balboas were formed in 1995 and released their first studio recording Heavy Surf Advisory in 1998. Accomplished studio musicians, the Balboas followed with the full length recordings Little Bit of Fear, and Big as You Need as well as a live release Duvel’s Advocate. The band quickly established a worldwide audience assisted by regular rotation on Little Steven's Underground Garage and an internet cult following.