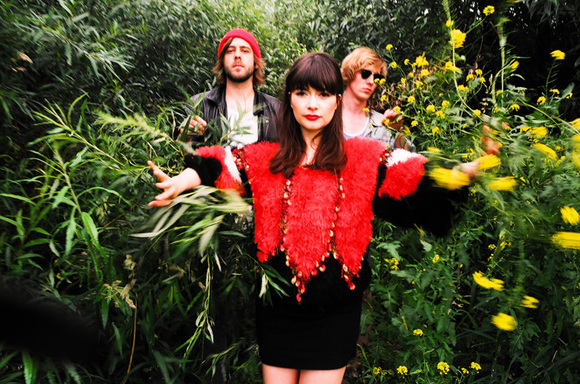 15 January, 2013: International trio selected for the most prestigious award in Poland.
“Paszport Polityki”, an annual award to young, upcoming artists, handed out by the biggest Polish weekly, was given to Très.B for their latest album 40 Winks of Courage.

Très.B is an international formation consisting of Polish singer Misia Furtak, Danish/English drummer Thomas Pettit and Dutch/American guitarist Olivier Heim (also known by his solo artist name Anthony Chorale). After forming in Denmark, the band made a name for themselves in the Netherlands, first self-releasing their EP "Neon Chameleon" (2006), then a full-length album "Scylla and Charybdis" (2007). Both releases were very well received, Dutch music Magazine OOR writing that "Melancholic pop has rarely sounded nicer." In another praising review, FRET magazine wrote: "Their album doesn't bore for a second and makes you curious about their new material". Très.B has also been compared to bands like Sonic Youth, the Smiths and singer-songwriter Feist.
Eventually the band moved to Poland for the release of their first major label debut "The Other Hand." In June 2010, Très.B signed with EMI Music Poland, and their full-length record "The Other Hand" was released on the 21st of September that same year. The album was recorded in Warsaw and mixed in New York by critically acclaimed producer Victor van Vugt, known for his work with artists such as PJ Harvey, Nick Cave and Depeche Mode. The album received a great amount of highly positive reviews, some considering "The Other Hand" to be one of the best Polish releases of 2010.
In 2011 Très.B was awarded with Fryderyk, The Polish Music Industry Award, for Best Debut of 2010 – “The Other Hand”.
Two years later they start 2013 with “Paszport Polityki” – the most prestigious cultural award in Poland.
Très.B has played over 200 shows at festivals and venues all over Europe, including:

The band shared the stage with acts like: Jamie Lidell, Myslovitz, Spiritualized, Asteroids Galaxy Tour, Seabear, TV On The Radio, Dry The River and many, many more.

Their latest album “40 Winks of Courage” (EMI Music Poland, 2012) received even more praise and was selected as one of the best albums released in Poland in 2012.

Their great asset are their live performances. Combining sweet lyricism with raw power and poignantly moving vocal harmonies, they have a lot to show with three albums under their belt.