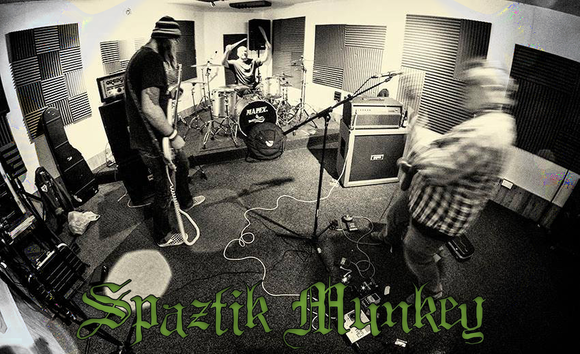 Spat out of the guts of a bourbon bottle in the early months of 2015, a concept for something so heavy and hateful sprang forth, and was given life.

The idea was a simple one - like all good ideas. Whiskey would be added to the bowels of existence that only a place like Rotherham could create, causing a primal heaviness that would serve to form the core ethics of the trio act that is - ‘Spaztik Munkey’.

Standing like a giant hairy ape man, spasming with anxious convulsions, Main took up fuzz bass duties. Short in stature, but large in girth, thrashing with the intense rage of misfortune, vocal and fuzz tonez would be taken up by Hardwick. Finalising the line up, Balmer would bring his muscular aggression, and violent tendencies to the skinz. This completed the most brutal line up ever to have been excreted from their dismal home town.

Fearlessly they set about bringing an entirely new outlook to the metal scene - no songs about space, no fucking wizards, no goblin bollocks, no rules and most definitely no bullshit. Pure rage, brutal honesty laden with violence, and hate.

With no topic being perceived as too ‘taboo’, and drawing inspiration from legendary acts old and new, such as ZZ Top, Buzzov*en, Tool, GG Allin, Bad Brainz, Iron Monkey and Credence, to name a few. A unique fuzzy laden beast began to emerge through the spring and summer months of 2015.

With heaviness and intensity at the forefront, these munkey bredrin spent 2015 writing and recording what would become their first EP (“Mucktub” - released Nov 2015). Mucktub would serve to be a musical entity formed from the whiskey vapours, and perverse life experiences of these three degenerate Rotherites. Loyalty was pledged only to the fuzz gods, and a middle finger was pointed directly at scene trends. The Spaztik Munkey has set itself forth upon the world crushing all before it under their sludgey excrement coated in blues, an aural assault like no other that can most accurately be described as unique and dangerous.