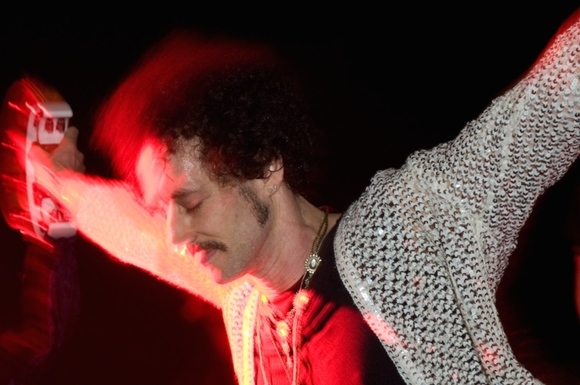 S N A X …is a multi instrumentalist, singer, songwriter, DJ and entertainer, whose roots run the gamut from punk to funk to disco and back.

He's traveled from his origin in the suburbs of Washington, D.C., to San Francisco, to New York City, finally settling on the vibrant artistic scene in Berlin. Other important markers on his timeline are founding the gay art band Fagbash, and his tenure in the influential disco-pop band Captain Comatose.
The inspiration of Berlin prompted Snax to forge his own unique path. From the electronic soul of From The Rocking Chair To The Stage, to the acoustic funk of Love Pollution, from the party platter Special Guest Star to his latest sprawling epic Shady Lights, his vast recorded output features him as vocalist, producer, and keyboardist- with-benefits. Along the way, Snax launched his label Random Records and created the House Of Snaxine, an umbrella for his various musical projects and collaborations, including porn alias Tony Amherst, and house productions under the moniker Box Office Poison.
Snax has recorded and toured with such luminaries as Jamie Lidell, Shunda K (of Yo! Majesty), Peaches and Joey Arias. Upon supporting The Scissor Sisters throughout Europe, Snax was described by frontman Jake Shears as “a one man fro freak show not to be missed.”