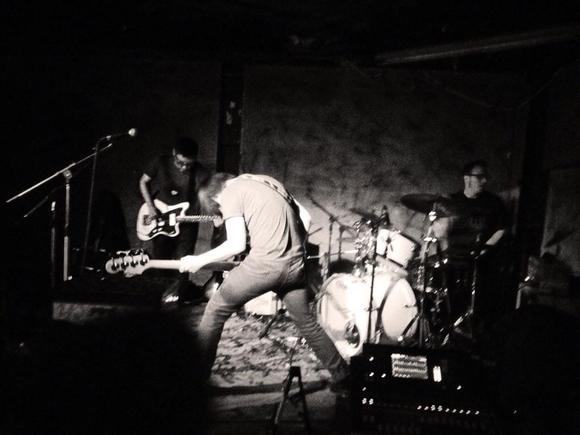 Half-japanese London based trio fronted by two baritone voiced brothers that have been making a name for themselves with volcanic live shows exploding tight poppy post-punk with effortless complexity and crazed solo's.

smallgang formed through kinship and bookshops. Comprising of brothers Simon and Toshi Kobayashi and their friend Matt Atkins.
Smallgang also provide the axis for a network of bands in which Simon, Toshi and Matt also play, including Slowgun, Crumbling Ghost, Splintered Man, Passerines and Russell and the Wolf Choir.

The band released their second album san (三) on Damnably on June 2nd and it features guest spots from Jon Fine from Bitch Magnet, Ritsuko Taneda from Shonen Knife and Jen that's in MBV/Graham Coxon's band.

PRESS
NME ““Second full-length effort ‘san’ pinballs between Pavement, Wire and The Strokes, with a roll-call of special guests including Bitch Magnet’s Jon Fine, Shonen Knife’s Ritsuko Taneda and sometime My Bloody Valentine member Jen Macro”
Americana UK 7/10 “They vary the noise quotient, from extreme on the title track to just darn pretty on ‘Cards’. So there’s variety, textures, tunes, noise and pretty much what I look for when I want to get lost.”
Collective-Zine “This is a really good album”
Sodapop (IT)
Slowthrills Best Albums of June 2014
Overblown ‘Song Of The Day’ (Cards) “Like Ian Curtis Fronting An Alt Rock Band”
‘San’ was streamed for 2 weeks at 3voor12 (Netherlands Zine)
God Is In The TV “A masterful record by a talented bunch who, in a kinder world, would be absolutely huge. One of the finest art-rock records you will hear this year.“
MusicOMH “undoubtedly one of the loudest, most inspiring bands around. Trespasses has given us a most delicate noise along with poetically mumbled lullabies, an inspiring combination.”
Drowned in Sound “ (Cockpit) stands tall next to any comparable offering from their contemporaries.”
The Line Of Best Fit “Nice grooves and even lovelier lyrics.”