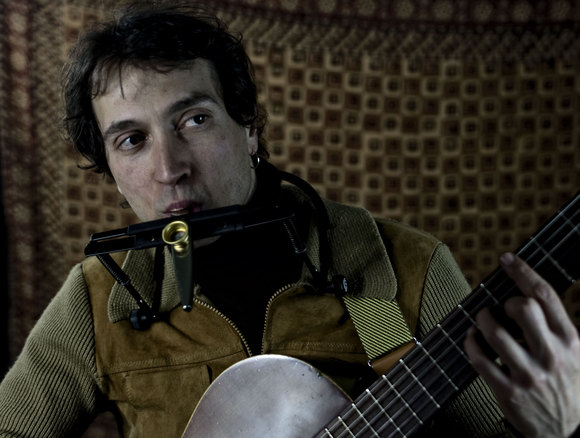 Silvio Talamo is an Italian songwriter, vocalist, guitarist, musician, his musical work combines the figure of the singer and songwriter with gipsy music, reggae, pachanka, jazzy and a grammelot singing that opens up to the vocal performance.

Melody, guitar, rhythm and scat are the elements of his original synthesis.
He can play alone on the stage, not rarely with the aid of a loop machine, a delay of the last generation that can record and repeat rhythms, melodies and harmonies, or with BAND suggesting a concert of high-impact and engaging.

Since some months it released on internet an EP recorded in Berlin.

His artistic journey begins while he is a student in Philosophy in Naples - a city full of contradictionsas well as of a bright artistic, political and cultural ferment. Being attracted by the world of oralityand storytellers, he approaches percussion and singing, bringing his performances, based onpoetry, voice and rhythm, throughout the underground clubs of the city as well as in festivals,literary events and concerts in squares. Here he engages in a wide range of musical genres,playing with “La Sezione Ritmica” of Francesco Forni, which won Arezzo Wave, and with Capone & Bungt Bangt, with which increases his experience in playing on the major national television networks and opening up (among others) the concert of Tim tour in Palermo with 50,000 spectators. He begins to cultivate an interest in the guitar and records his first compositions.
In 2010 two of his songs are in the compilation Virus Vitale dedicated to new talents
Neapolitan and produced by Willy David, historical producer of Pino Daniele
After a number of experiences, bands and projects he finally decides to devote himself to
songwriting.
He moves to Berlin where he begins to perform as a songwriter, guitarist & vocal
performer, distributing all around demos and photocopied links of his songs in a recorded version on two tracks: vocals and guitar. The condescending atmosphere of the city gives vent to hiscreativity. His artistic activity increases and self-produces an EP entitled “Quattro canzoni per ricominciare” (“Four songs to start again” in English). His songs are often full of colour and rhythm,which give a new nature to the elements belonging to the classical or folk songwriter.