Shira Z. Carmel and her Brasserie 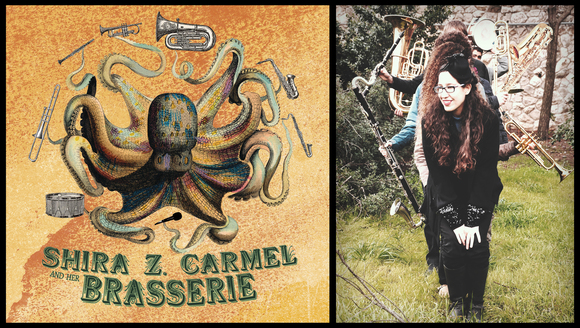 Carmel and her Brasserie
A singer-songwriter and a brass-band walk into a bar...

Carmel's newest adventure is an Avant-Groove Brass Band, standing (and dancing) on the thin line between Jazz, Art and Pop. This unusual ensemble features 6 brass and woodwinds players, a drummer and a singer-songwriter.

After years of traveling between the arts - be it dance, theater or photography - Carmel has found her artistic home in music. For over a decade of writing and performing, her songs have taken many shapes and sounds, whether it's a doo-wop swingy tune with her band "The Hazelnuts", a rocky-jazzy-cabaret ballad with her former " Carmel Quartet", or a Yiddish poem composed into music with her Avant-guard duo "The Technicalities". Whatever the instrument, whatever the genre, Shira creates a human microcosm: a SONG, and with it - an idea, a story, a new perspective. Now - accompanied by 6 horns and a drummer there's no stopping her.

Finding inspiration in the classical brass quintets, jazz big-bands and the 1940s' cool jazz, arranger Orr Sinay dips Carmel's songs in a hot sauce of horns and drums that best befits her sultry voice and poetic lyrics. Carmel & Sinay met in the Jerusalem Music Academy, and it was musical love at first sight. They now collaborate in this fascinating project, where Brass, Wind and Fire come together.

After performing for astounded audiences throughout the year, Carmel and her Brasserie released their debut album on Jan. 1st 2016 and have already gained critical acclaim from Israeli media:

9/10 - Despite this instrumental and intellectual complexity the album feels "jammy" and light and the joy of music making blows through it like a storm.
(Amir Ascher Haaretz music blog)
*

" Carmel's act is likely the best musical act in Israel today... One could say that Carmel hovers somewhere in the middle of a dodecahedron, whose faces include Tom Waits, Frederick Chopin, Kurt Weill, the Soft Machine, Jolie Holland, Regina Spector and, say, the Pixies, but that would be to say nothing about it."

(+972 Magazine, about a live performance of the Carmel)